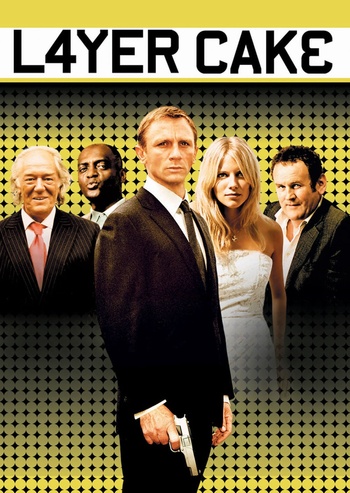 "I hate guns. And violence. But, as some Roman general once said... if you want peace, prepare for war."
"You're born, you take shit. You get out in the world, you take more shit. You climb a little higher, you take less shit. Till one day you're up in the rarefied atmosphere and you've forgotten what shit even looks like. Welcome to the layer cake, son."
— Eddie Temple
Advertisement:

Layer Cake is a 2004 British crime film directed by Matthew Vaughn, and based on the 2000 novel of the same name by J.J. Connolly, who also wrote the script.

A not-so-legal London businessman (Daniel Craig), planning for an early retirement, gets in slightly over his head during one final drug deal. Things quickly escalate, until our protagonist gets double-crossed, loses control and, as they say across the pond, everything goes tits up.

Layer Cake is a clever, character-driven take on the classic gangster flick, rounded out by a brief romance, black comedy, genuinely unexpected twists, and an overload of Britishisms. The star-studded cast features a plethora of British celebs, some of whom were already famous before this flick, and some having struck fame worldwide after the film, particularly our protagonist.