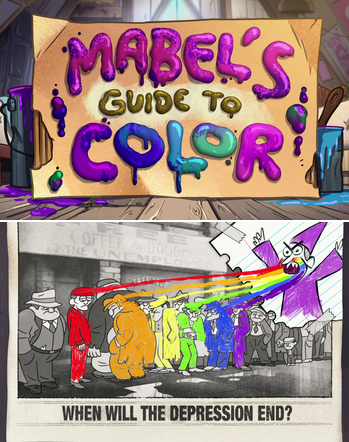 The Great Depression is considered one of the worst chapters in America's history. The economy was obliterated, and unemployment was at an all time high. It was an era of sorrow with no... OOH, LOOK AT THE PRETTY COLORS!
"The creators of South Park, the satirical cartoon, are no strangers to controversy... but now they seem to have taken the taboo-busting to a place even hardened South Park watchers have found hard to go."
— Catherine Elsworth

, on "The China Probrem"
Advertisement:

Black Comedy can show up in the most unexpected places. A series might be the most generic and inoffensive Dom Com around; the darkest subject matter it normally handles might be teens drinking alcohol or married people being tempted by another man/woman. And even then, the subject matter is likely to be treated seriously rather than played for laughs; it might even be the subject of a Very Special Episode.

But then along comes a moment when the series brings in a topic it would normally never touch with a ten-meter pole (abortion, suicide, rape, Nazis, what-have-you) and treats it with just as much casual, lighthearted humor as it does recipes gone wrong or a Two-Timer Date. For that one moment, that one joke, the series becomes a Black Comedy... then it goes right back to being nice and innocuous again.

Note that, if a series already is a Black Comedy, it's still possible to fit this trope, but the burst of black comedy has to be really extreme. For example, Seinfeld usually didn't shy away from dealing with plenty of dark subject matter, but it's usually just the characters discussing it. If they had done an episode where the Main Characters actually raped or killed someone, and they still played it as much for laughs as ever, then it would still qualify as a Black Comedy Burst.

A subtrope to both Genre Shift and Mood Whiplash since they include all possible ways to change the main emotional reactions that are invoked and the type of the story. Contrast Big-Lipped Alligator Moment.

The infamous Baby Pizza scene where Gumball and Darwin "deliver" a pizza to a pizza-headed couple. They treat the pizza like its their own child. So they're not exactly happy when Gumball accidentally drops the pizza to the ground with Darwin slipping on it for good measure.

The infamous Baby Pizza scene where Gumball and Darwin "deliver" a pizza to a pizza-headed couple. They treat the pizza like its their own child. So they're not exactly happy when Gumball accidentally drops the pizza to the ground with Darwin slipping on it for good measure.