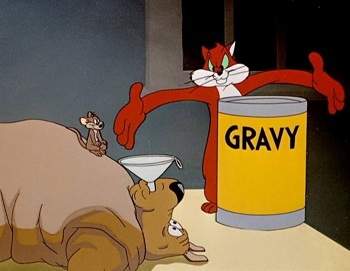 "This time, we didn't forget the gravy!"
"What? No gravy?!"
—The dog to the cat, repeatedly
Advertisement:

The cartoon is centered on an unnamed cat and mouse, who are both unwilling victims of a greedy dog that bullies them (mainly the cat) into taking part in his get rich quick schemes so that he can fulfill his insatiable gluttony for meat (and gravy). Much hilarity (of the Black Comedy variety) ensues.

Should not be confused with the 1944 Private Snafu cartoon The Chow Hound.