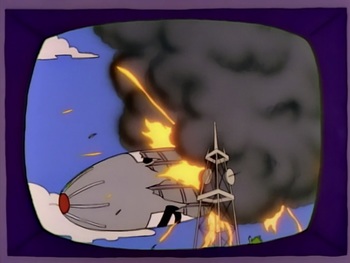 So the Duff Blimp is actually a zeppelin?
Whenever a movie includes a Zeppelin or similar airship, the odds are, it's going to go down in flames. It might be fun to say that in fiction, zeppelins first tend to go up in flames before going down in flames.
Advertisement:

But why? There is the stereotype of: "If airships using lighter-than-air gas are present in a fiction, the gas will be flammable."

Why flammable gas? Look no further than The Hindenburg.

The Hindenburg only used flammable hydrogen because Nazi Germany was under an embargo on helium. In fictionland, all dirigibles are filled with combustible gas.

Dirigibles and even blimps in real life are generally more difficult to injure than their depiction in fiction - that is, something like a very large party balloon - would suggest. The gas was contained in a number of compartments, rather than a single big balloon. During WWII, blimps - typically belonging to the US Navy - were frequently tasked with protecting supply convoys on the Atlantic. The blimps were not expected to actually engage in battle (though they did carry depth charges and machine guns), but rather to serve as a form of airborne early warning, being able to spot enemy warships from much father away than a surface vessel. No convoy with a blimp escort was ever sunk by U-Boats.

One other point worth mention is that most airships in real life aren't actually pressurised. We're used to balloons full of pressurised gas, which burst and leak when they get the tiniest hole, because party balloons are made of rubber which only holds its shape when inflated. Most large rigid airships (including the Hindenburg) however were made of thin sheets of fabric supported by an internal framework. They held their shape without having to be inflated, so there was no pressure difference between the inside and outside, and as a result a single puncture won't burst it - even huge holes aren't necessarily fatal if there's a suitable landing site nearby.

It's also worth remembering that even zeppelins filled with hydrogen are difficult to ignite. The ones bombing London were next to impossible to bring down until specialist ammunition was developed,note Bullets designed to light the gas just passed through them without igniting the hydrogen, because there wasn't any oxygen inside for it to burn with, and neither them nor normal rounds could do enough damage to the aircraft's shell to let any in; eventually fighter planes carrying specially positioned guns loaded with alternating explosive and incendiary bullets proved successful.note Note that "next to impossible" does not mean Nigh-Invulnerable; even before the development of these special ammunition loads, a number of zeppelins were brought down by shooting them over and over and over and over and over again until they were so full of holes that they lost enough buoyancy to force an emergency landing. However, this was quite difficult and time-consuming, and generally only worked against zeppelins that got lost over enemy territory or were prevented from returning home by contrary winds. and even then took multiple runs to actually set aflame. They could even keep going after losing a fair quantity of their hydrogen, because by that point in the mission, they were much lighter (having dropped their bombs and burned much of their fuel).

One thing that can afford a zeppelin a measure of protection from this fate is if it's only there to show that the story takes place in an alternate universe. This protection applies most strongly to background zeppelins that exist solely for that purpose; a zeppelin that plays a large role in the plot takes its chances like everyone else, especially if it belongs to a villain.

See also Oh, the Humanity!. For other objects that are introduced into the narrative solely to be destroyed spectacularly later on, see Ashes to Crashes, Carrying a Cake, Doomed Supermarket Display, Fruit Cart, Priceless Ming Vase, and Sheet of Glass. See also Every Car Is a Pinto, which is about cars exploding when they shouldn't.

Well, with a name like "Hindenpeter" it's bound to end up in an explosive crash...

Well, with a name like "Hindenpeter" it's bound to end up in an explosive crash...