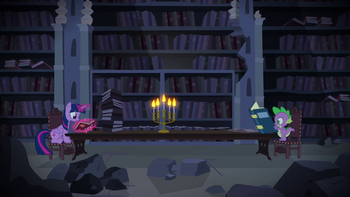 "What is a man?" "I don't know. Keep researching."
Applejack: Do you think there's a single room in this castle that isn't filled with terrifying things?
Written by Josh Haber
Advertisement:

Twilight Sparkle has combed through every last book in Ponyville, looking for any information she can find on the mysterious chest from the Tree of Harmony and the keys to unlock it. Before she runs out of ideas, Spike belches up a letter from Princess Celestia directing her to the ancient ruins of her and Luna's former castle in the Everfree Forest to look for a book that could help with her research. Spike would much rather stay out of the creepy castle, but Twilight is so excited to be reading in the princesses' old library that she pays no heed to the spooky surroundings.

Meanwhile, Applejack and Rainbow Dash's latest dare competition has come down to a tie. After their scorekeeper Pinkie Pie leaves to test Ponyville's new school bell for the week, Applejack comes up with a tiebreaker challenge — in the ancient castle. Applejack tells Rainbow Dash an old pony's tale: before Nightmare Moon was banished, a bit of her dark magic was left behind to haunt the castle halls at night as... the Pony of Shadows! The two decide that the one who can stay in the castle the longest without being scared away by the dark presence will be the winner.

As this goes down, Rarity brings Fluttershy and Angel to help her collect and restore some old tapestries from — you guessed it — the ancient castle. While fidgeting behind a giant drape, Fluttershy stumbles upon a rotating wall and winds up in front of Applejack and Rainbow Dash just as a long, cloaked shadow looms over the pair, scaring them deep into the castle halls with her muffled cries. The wall spins back around and Fluttershy and Rarity reunite, only to fall straight down a trapdoor accidentally tripped by Angel.

As the two frightened pairs continue stumbling into secret doors and hallways, Angel finds Twilight and Spike reading in the library, startling Spike into activating another hidden passage. They find a room housing the book from Celestia's letter: her old journal. Twilight dives nosefirst into the book, eager to know what secrets it may hold. One of these secrets is a trick pipe organ, which the ponies begin to hear being played by a mysterious cloaked figure. With each key pressed, the figure activates even more traps that Applejack and Rarity fall into, separating the girls.

Scared out of their wits, Applejack, Rarity, Fluttershy, and Rainbow Dash all back into each other while trying to get out of the castle, which sends them into a panic. Their clamoring alerts a nearby Twilight, who manages to calm them down by freezing them in place with a spell. Suddenly, the girls hear the ominous sound of the pipe organ and follow it to find what they think is the Pony of Shadows. Since Twilight has read up on all the castle's secrets from Celestia's journal, however, she is unafraid of the hooded figure and uncloaks it to reveal...Pinkie Pie?!

It turns out that after Pinkie finished ringing the school bell (with her head), she went into the Everfree Forest to pick some flowers for a party, only to spot her friends going into the ancient castle for a "party" of their own, so she decided to help by playing some music. Twilight admits that while she couldn't find anything about the chest, she's glad to have helped her friends. Inspired by Celestia's journal, the girls decide to keep a journal of their own so they can keep track of what they've learned. They then laugh off the tale of the Pony of Shadows into the night, never once noticing the eerie, glowing-eyed shadow looming outside the room...

THEN WHO WAS PONE?
Feedback

Example of:
Can Only Move the Eyes