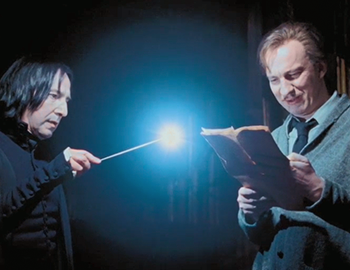 And then Professor Snape said, "Let there be light", and there was light.
But mysterious caves and tunnels always have luminous fungi, strangely bright crystals or at a pinch merely an eldritch glow in the air, just in case a human hero comes in and needs to see in the dark. Strange but true.
— Terry Pratchett, Men at Arms
Advertisement:

In speculative fiction, especially low-tech and high-magic fantasy settings, you can't expect to see much use of regular flashlights to use in dark areas, so there are either Hollywood Torches or the Fantastic Light Source to use. Common variants include glowing gems, lighting bugs and luminescent flora and fungus, while Mundane Utility may be derived from the fact that Power Glows or from fire, electricity, or light-based Elemental Powers. Either way, it's almost always guaranteed to last indefinitely.

See Hollywood Darkness, for when no explanation is given for all the light and visibility on the scene. Not to be confused with Supernatural Light, which signifies spirits or ghosts.