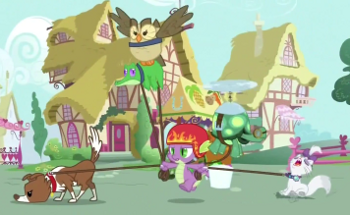 Spike is eagerly making a jewel-encrusted cake all for himself, but thoughtlessly eats his entire stash of jewels before he can get started. And if he weren't feeling bad enough, he wasn't even invited to the Crystal Empire with Twilight and friends to welcome the head of the Equestria Games. Just then, Fluttershy comes over and lifts his spirits by offering him a big, juicy jewel for his cake...if he looks after Angel Bunny while she's away, that is. Without a second thought, Spike gets the brilliant idea of convincing everypony else to let him watch their pets in exchange for more jewels. By the time the six ponies ship out to the Crystal Empire, Spike has a small stash of jewels of every shape and size—and a library full of critters that he has no idea how to take care of!

Spike would much rather finish his cake than look after the unruly pets, particularly Angel, who bounces away the first chance he gets. Spike chases Angel to the Cutie Mark Crusaders' clubhouse and finds the bunny better enjoys the company of Apple Bloom, Scootaloo, and Sweetie Belle, so he gets another idea: leave all the pets with the Crusaders so they can "get their critter-sitting cutie marks"! But Apple Bloom demands one of Spike's jewels in return so they can pay for petsitting supplies. Now not only is Spike short one jewel, but he later discovers that the Crusaders are (shockingly) no better petsitters than he is and have already spent the jewel on a giant pet hairdryer.

The day keeps getting worse for Spike as he tries to find more ponies to shift his responsibilities onto: Zecora takes a jewel in an offer to relieve him of his "bad mojo", which turns out to be his dragon greed and not the pets as he hopes; and he bribes Granny Smith with another jewel to keep her mouth shut about his questionable petsitting methods. Soon Angel Bunny gets loose again and boards a train, and Spike pretends to chaperon the Cutie Mark Crusaders to convince the conductor to let him and the pets board, giving up yet another jewel for payment. Unfortunately, they only catch Angel right as the train departs—straight for the Crystal Empire, no less!

Once they get to the empire — and Spike gives away his second-to-last jewel to pay for a wrecked donut cart — Angel sees Fluttershy and friends at the station, and once again gets loose to reunite with his owner. Spike desperately throws his final, biggest jewel and knocks down a tower of luggage to block Angel's path so he can catch the bunny. Spike, the pets, and the Crusaders all board the train back to Ponyville but, unluckily for them, all have to hide in the same car as the six ponies.

Angel threatens to expose Spike to the oblivious ponies, but overhearing Twilight compliment what a great petsitter Spike is makes the guilty dragon realize he's been anything but and deserves to get caught. Angel has a change of heart, but Spike's sudden stomach-rumbling threatens to expose them all instead, so Angel saves everyone by fetching the big jewel and feeding Spike half of it. They all return to Ponyville and get off the train in time to meet Twilight and their friends, who remain none the wiser to the sidekicks' misadventures. Spike finally goes back to making his jewel cake...only to thoughtlessly eat the rest of his last jewel.

Note: This is the eighth episode of the third season, but the eleventh aired.