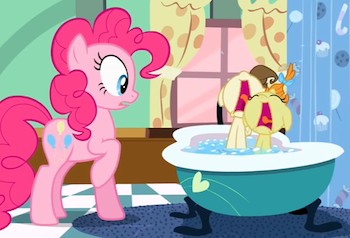 Easy as (Pinkie) Pie... or biting off more than she can chew?
Mr. Cake: Now, Pinkie Pie, are you sure you really understand the responsibility of watching over two babies?
Pinkie Pie: I can be responsible! Why, "Responsibility" is my middle name! Pinkie Responsibility Pie.
Written by Charlotte Fullerton
Advertisement:

At the Ponyville hospital, the Mane Six are gathered to view the newborn foals born to Mr. and Mrs. Cake. Mr. Cake introduces his son, Pound Cake. Then he introduces his daughter, Pumpkin Cake. To everypony's surprise, Pound Cake is a Pegasus and Pumpkin Cake is a Unicorn. Mr. Cake explains it that both he and Mrs. Cake have distant Pegasus and Unicorn ancestors (and quickly wonders if that makes sense). Regardless, Pinkie is so thrilled to have new little playmates, she wants to sing and play with them on the spot, only to get kicked out by Nurse Redheart. Rainbow Dash, Twilight Sparkle, and Rarity warn the Cakes that their babies' pegasus and unicorn abilities may manifest early and wild.

A month later, Pinkie Pie is delighted that she finally has the opportunity to sing to and play with the babies... but when it comes to diaper changes and bottles, she doesn't really have a handle on what they need. At the mention of food, Mrs. Cake suddenly remembers they have an extremely large catering order they'd completely forgotten about, having been so distracted with the babies. Although Pinkie volunteers to babysit, the Cakes walk all over Ponyville in search of a babysitter, only to find every other pony unavailable. Pinkie, who has been following all along, repeats that she'd be happy to babysit, and the Cakes reluctantly accept. Pinkie goes wide-eyed at Mrs. Cake's list of babysitting duties, but bravely urges them to leave... whereupon the babies immediately begin bawling.

Pinkie Pie tries several things to make them laugh, including peek-a-boo and a stand-up comedy routine, but the only thing that seems to work is dropping a sack of flour over herself, which the babies find hilarious. She has difficulty feeding them (since they won't eat like an older pony would) and getting them bathed, but truly realizes she's in over her mane when their diapers need to be changed. When Twilight Sparkle stops by and offers assistance, Pinkie is grateful at first, but becomes insulted when Twilight innocently mentions that she figured Pinkie would need help—after all, some ponies aren't up to taking care of babies. After sternly showing Twilight the door, Pinkie Pie goes from playful Pinkie to responsible Pinkie: no more fun and games.

The twins are stunned by Pinkie Pie's stern and responsible attitude, and immediately go to sleep when she tells them to... only to disappear from their crib when Pinkie looks away for just one second! After a frantic search, she realizes that their pegasus and unicorn abilities have manifested; she chases them all over the house, trying to keep up with them, but is clearly disadvantaged both in numbers and in (a lack of) abilities. Pinkie tries more and more drastic ways of keeping them in line, but the babies easily use their talents to get past her. Finally pushed past her limits, Pinkie Pie bursts into tears of sorrow; astonished at the sight, the twins come up to her and dump a bag of flour over themselves, and Pinkie stops crying to admit that it is pretty funny.

The letter to Princess Celestia, done as a voice-over over a montage of Pinkie cleaning up after the mayhem the twins caused, is a summation of what Twilight originally said: Pinkie had thought being good at playing with kids automatically would make her an A-1 babysitter. She hadn't realized how that didn't make the actual caretaking come naturally, and that somepony's desire for responsibility can outrun their ability to handle it.

The Cakes return, braced for the worst, but they are pleasantly surprised to see that their home is clean and sparkling with everything in its place.

Carrot Cake: ...are we in the right place?

They begin to remark on how amazed they are, but Pinkie shushes them because the twins are asleep. The Cakes apologize, complimenting Pinkie on how responsible she is, then ask if she'd like to be their go-to babysitter on a permanent basis. Pinkie, recalling her ordeal, immediately refuses in an Ironic Echo of her original eagerness, but when the babies smile and call her name in their sleep, she instantly relents and tells the Cakes she has some free time on Tuesday.

Note: This is the twelfth episode of the second season, but was the thirteenth aired.