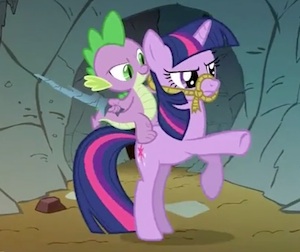 Sir Spike and his noble steed, off to rescue Lady Rarity (Not that she needs saving).
Spike: Rarity... woods... jewels... dogs... hole... taken... SAVE HER!
Written by Amy Keating Rogers
Advertisement:

Sapphire Shores, the Pony of Pop, has just commissioned Rarity to design five costumes for her upcoming tour. There's just one problem; Shores wants them to be covered in gems, and Rarity had just gone through the last of her stock. In order to satisfy Shores' order, she goes gem-hunting with Spike in a nearby quarry. While Rarity casts Detect Gem with her horn, Spike digs up the caches of gems she finds.

As they are getting ready to return, however, the two are ambushed by the Diamond Dogs, a trio of Gollum-esque dog-men. They've taken notice of how easily Rarity is able to find gems, and so have decided to kidnap her and force her to find gems for them. Despite Spike's best efforts to fend them off, he is outnumbered and outmatched, and Rarity is dragged underground.

After several imagination scenes, Spike and the other ponies head underground to rescue her, thinking she must be in great danger. Meanwhile, the Diamond Dogs order Rarity to start finding gems for them. Slowly, however, she starts getting on their nerves: When the dogs tell her to dig up the jewels, she refuses to more than scratch the ground little by little, on account of her having had a "pony-pedi"; when they force her to pull a cart to carry around the gems, she proceeds to criticize her captors' nails, breath, overall hygiene, etc. and when they start complaining about the whining...

Advertisement:
Rarity: I am not whining; I am complaining! Do you want to hear whining? (in higher-pitched voice) Thiiis is whiiiiining! Oooo, this harness is too tiiiight! It's going to chafe! Can't you loosen it? Oh, it hurts and it's so rusty! Why didn't you clean it first? It's going to leave a stain, and the wagon's getting heavy, WHY DO I HAVE TO PULL IIIIIIIT?!

The dogs cave into Rarity's demands to treat her better at first, but then try to re-assert their authority over her. However, Rarity refuses to pull any passive-aggressive punches, and the whining starts to grate on the Diamond Dogs even more.

Meanwhile, Spike and the other ponies are getting closer to where Rarity's being held, only to be stopped by a group of Diamond Dog guards. After successfully bucking them into submission, the group charges into the dogs' lair, only to be met by Rarity's frazzled captors. The dogs demand that they take Rarity back, as they can no longer take her whining and complaining. Rarity arrives, stating that her friends are just in time to help her carry the huge cartfuls of jewels she's collected. As the group heads back home, with enough gems in tow to fill Sapphire's order, Rarity relates how she had the Diamond Dogs wrapped around her hoof, teaching everyone that even a ladylike pony can get herself out of a sticky situation.