It Was a Gift 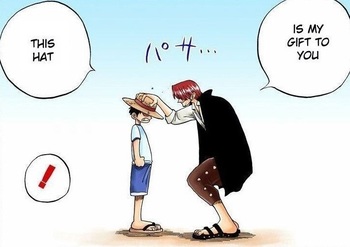 "Every boy should have a hat."
Advertisement:

How to indicate something The Hero owns is cool, or important, or plot-significant — there are a lot of ways, but one of the most common is to make it a gift from another character. Two birds with one stone, since it can delineate character, and the relationship between two of them, as well as play up the importance of this object. If it is part of the Back Story, often the character will relate it with great pride, which makes a good Framing Device. Even an otherwise useless gift may help you on your quest. It can also be used to disguise the MacGuffin's plot-device status (particularly the Memento MacGuffin) or to introduce Chekhov's Gun in a subtle way.

May also explain an incongruous possession.

The Powers That Be make the most impressive sources, but ordinary characters can serve. Mentors, Anonymous Benefactors, the Reasonable Authority Figure, and parents are likely to present such an item, which may be a physical manifestion of So Proud of You — as is the dead little sister. When the gift comes from an equal, it is likely to be reciprocal, often marking Fire-Forged Friends. It is not unknown for them to have strings that only become evident later.

Ancestral Weapon sometimes falls into this, but only if the character was particularly chosen to receive or inherit the weapon. The Cool Sword is particularly likely to be a gift. Partly, no doubt, because there are so many Cool Swords out there. Take Up My Sword and Passing the Torch often involve such a gift, a concrete expression of what is being passed on. The Lady's Favour is a subtrope.

Note there is no reason why it can't be an Evil Weapon. Or under a curse or any number of unpleasant things.

Contrast Give Me a Sword, which is temporary — though it may convert into this after the fight is over. Super-Trope of Supernatural Aid. See Ancestral Weapon and Protective Charm for common gifts.

Not to be confused with The Gift, or GIFT.