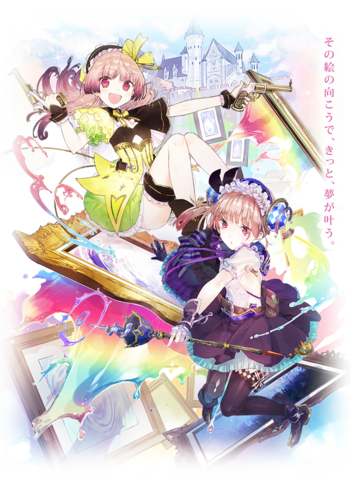 Atelier Lydie and Suelle: The Alchemists And The Mysterious Paintings is the nineteenth game in the Atelier series and the third entry of the Mysterious subseries. In Merveille, the capital city of the Adalet Kingdom, twin sisters Lydie and Suelle Malen struggle to make ends meet while working in their father's small atelier. One day, they are called by a strange voice to a painting in their basement. The painting acts as a portal to another world containing unique alchemy materials, which the sisters plan to use to give the father's atelier an edge in the business.

Unlike Escha & Logy and Shallie, the two protagonists do not each have a separate route: it is possible to switch between the lead alchemists at any time. In combat, the party is split into three pairs, with one member of each pair being in the front line and the other in the back: the back-liner acts automatically while the front-liner is controlled by the player. This game also features the return of the ability to synthesize items during combat.

An Updated Re-release featuring a new explorable painting based on Nelke and the Legendary Alchemists: Ateliers of the New World came out on April 22, 2021 as part of a Compilation Rerelease of the Mysterious trilogy.