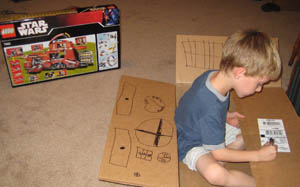 A parent's rite of passage.
"You dumb babies! Stop having fun! It's just a stupid box!"
— Angelica Pickles, Rugrats, "The Box"
Advertisement:

Kids and cats covet boxes while ignoring the (presumably valuable) contents inside. This happens to many parents when they purchase a super-special, ultra-rare, highly-expensive present for their kid, usually for a birthday or Christmas, only for the recipient to carelessly toss it aside while they focus their attention at the most awesome cardboard box it came in.

A common gag in comedies with small children, and a case of Truth in Television for a lot of parents. See also Mundane Object Amazement, My New Gift Is Lame, Unwanted Gift Plot, and Worthless Yellow Rocks.