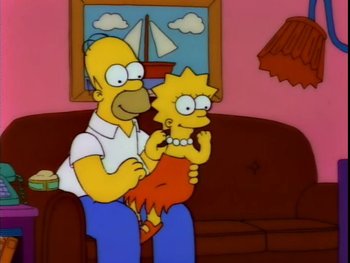 Homer and Lisa find a way to bond approaching their vastly distant interests (and intellects), with Homer using Lisa's uncanny ability to accurately predict the winning team on football games to win a fortune under the guise of Sunday being "Daddy-Daughter Day". When Lisa realizes at the end of the football season that she was only being used, she gives him the silent treatment, forcing Homer to expect to lose his gamble for the Super Bowl... but can he?.

Homer is never able to pick the winners of football games in which he bets heavily—He first follows "Smooth" Jimmy Apollo's prediction that Denver will beat New England, only to get smashed 55-10 (with the Patriots starting the game with a touchdown). Meanwhile, Lisa complains to Marge that Homer always ignores her; Marge suggests that the two watch football together, which she does reluctantly. For the the Miami-Cincinnati game, Homer resorts to other experts but even "The Coach's Hotline" (a very pricey service) turns out to be a ripoff (given ... his ... ve ... ry ... slooooooooooooooooowwwwwwwwwwwww ... sp-sp-sp- tal- ... -king ... ). Out of options, Homer turns to Lisa to help him pick a winner; Lisa, not sure what to say, picks Miami, prompting Homer to call Moe, who is running a betting ring under Chief Wiggum's nose, to place his bet. The Dolphins beat the Bengals, and Homer and Lisa appear to have found a common interest in football, and Homer declares Sunday "Daddy-Daughter Day". Meanwhile, Marge takes Bart to an embarrassing experience at the kids' clothing store.

Lisa quickly becomes an expert in picking winners of games, attaining a perfect record for eight straight weeks. Homer uses this knowledge to win thousands of dollars from Moe, and proceeds to spoil the family with fancy dinners and toys for the kids. But, Homer being Homer, he manages to ruin a good thing when Super Bowl Sunday approaches—When Lisa asks her father to go hiking with the Sunday after the game, Homer tells her that he already has plans for bowling with Barney that day and that "Daddy-Daughter Day" is over until next football season. Lisa realizes that Homer was only using her to correctly bet on football games and win money and becomes terribly crushed by Homer's thoughtless words, running to her room in tears, while Homer is scolded by Marge for gaining money illegally.

A shaken Lisa has a nightmare about growing up to be a worn out gambling addict and gives away her Malibu Stacy toys (all purchased with "dirty money") while Homer starts to realize he screwed up and tries to apologize to Lisa, but she refuses his invitation to watch the Super Bowl together as an insincere attempt at making amends. With Homer begging her for a pick, Lisa relents and tells him her pick is Washington, but she makes it clear she subconsciously wants him to lose out of rage, so she recommends he do the opposite of what she tells him and bet on Buffalo—As this confuses Homer, a resigned Lisa tells him, "If I still love you, Washington; if I don't, Buffalo".

Come Sunday, Homer realizes that he has much more than just a few dollars in game. When Buffalo builds a solid lead early in the game and Bart begins taunting him, a distraught Homer goes to Moe's to try to relax and forget about Lisa's words. In the end, Washington rallies from behind to score a last-second victory... and Homer happily celebrates the win, in spite of not winning any money, conscious that Lisa's love is far more valuable than money and that said love is secure. Lisa is also relieved that Washington won, meaning she still loves her father. Homer then cancels his bowling engagement with Barney to make good on his promise to go hiking with Lisa next Sunday.