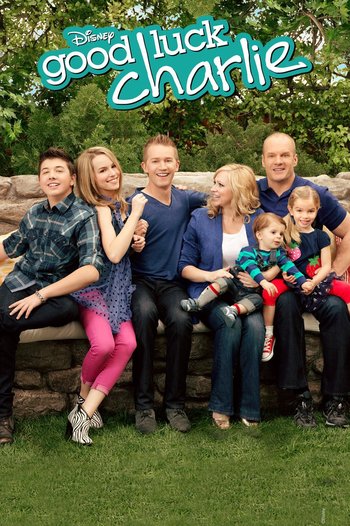 Pictured left to right: Gabe, Teddy, PJ, Amy, Toby, Bob, and Charlie.
"If you ever try and pull anything over on Mom, good luck, Charlie."
— Amy Duncan
Advertisement:

Good Luck Charlie is a domestic comedy, produced for the Disney Channel. It premiered on April 4, 2010 and aired its finale on Feburary 10, 2014 with 97 episodesnote Though the official episode count called the finale "Episode 100", as double-length episodes are considered two each.

The show revolves around the Duncan family, a typical working-class family living in a Hollywood writer's version of the Denver area. The family starts out as mother Amy, father Bob, eldest child P.J., eldest sister (and main character) Teddy (played by Bridgit Mendler), middle brother Gabe, and the new addition (implied to have been an unexpected pregnancy) of the youngest sister Charlotte (or "Charlie", giving the series its name). Season 3 also added a fifth child to the family, a boy named Toby.

In each episode, Teddy adds to a video diary that contains advice for Charlie about navigating life in their family and as a teenager in general, with each entry ending with Teddy (or another family member — even Charlie) saying, "Good luck, Charlie."

Believe it or not, Good Luck Charlie is the first low-concept Disney Channel show in nine years, since Lizzie McGuire premiered in 2001 (making it the first such series in the recognized Disney Channel Live-Action Universe). The creators worked meticulously on crafting a show with broad appeal and relatable characters, and wanted a show that whole families would watch and enjoy, rather than just tween girls. As with most KidComs, it is a bit of a stretch to call the Duncans a normal family.

A Disney Channel Original Movie of the series, Good Luck Charlie, It's Christmas!, was originally aired on December 2, 2011, the first Christmas-themed DCOM to premiere in 10 years. It follows the Duncans as they try to make it to Palm Springs, California (and Amy's parents' new condo) in time for the holidays. Though they originally board a flight to Palm Springs, Teddy volunteers to be let off the plane due to overbooking in exchange for another plane ticket she plans to use for Spring Break. Due to all other flights being full, Teddy, accompanied by Amy, need to find an alternate means to get to Palm Springs. Wacky Hilarity Ensues.

Also had a Crossover Episode with Shake it Up titled Charlie Shakes it Up; unlike other Disney live-action series crossovers this only consisted of a single Good Luck Charlie episode rather than an episode for each participating series. A larger-scale crossover with Jessie aired in November 2013, Good Luck Jessie: NYC Christmas. There are also three extended episodes, Snow Show, Sun Show (both of which have the Duncans go on vacation) and Duncan Dream Home (the Season 4 opener).

After five years, four seasons and exactly 100 episodes, the series closed out on February 16, 2014 with the one-hour episode, Goodbye Charlie.

"If you keep reading through these tropes, well...good luck, Charlie."