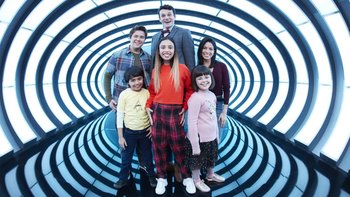 "I do my thing."note Clockwise from center: Gabby, Jeremy, Wesley, Principal Swift, Dina, and Olivia.
"So anytime I feel some type of way
Don't understand the human race...
So what, so what, so what?"
— Theme song
Advertisement:

Gabby Duran and the Unsittables is a sci-fi comedy series based on the novel of the same name by Elise Allen and Daryle Conners. It had its world premiere on the Disney Channel on October 11, 2019.

After living in the shadows of her successful mother and smart younger sister, Gabby Duran (played by Kylie Cantrall) finds her moment to shine when she gets a job babysitting an unruly group of extraterrestrial children who have been hiding out on Earth disguised as humans. Gabby resourcefully and fearlessly steps up to the challenge to protect the children and their secret identities.

A second season was announced ahead of the series premiere which premiered June 4, 2021, about a year after the first season ended. It finished on November 26 the same year.

On December 1, 2021, Nathan Lovejoy announced on his Instagram that the series has been cancelled and will not be renewed for a third season, leaving the series Left Hanging.

When Principal Swift (supposedly) leaves for Gor-Monia, Gabby starts to lose it when he doesn't call back.

When Principal Swift (supposedly) leaves for Gor-Monia, Gabby starts to lose it when he doesn't call back.