Series / From Dusk Till Dawn 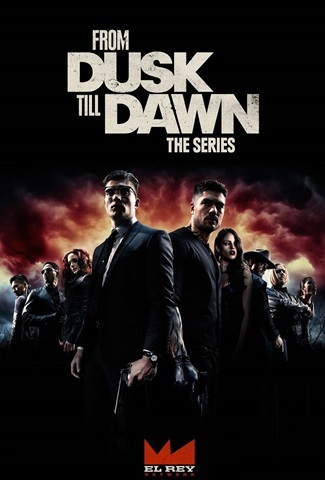 Like the movie it is based on, the series centers on two brothers, Seth Gecko (D.J. Cotrona) and Richard “Richie” Gecko (Zane Holtz), professional criminals on the run from the authorities after a disastrous bank robbery, who are trying to make their way to safe haven across the border in Mexico. Along the way they take a family hostage: former minister Jacob Fuller (Robert Patrick), his daughter Katie Fuller (Madison Davenport) and son Scott Fuller (Brandon Soo Hoo).

However, things are complicated by supernatural forces at play that have taken an interest in the Geckos, and seem to be leading them to a fateful confrontation.

The show ran for three seasons before unofficially ending on November 1, 2016note the date of the season three finale, after the cast were released from their contracts

the day prior. There was a brief moment where the show was considered for a fourth season on Netflix, but things fell through

open/close all folders
#-I
K-Z
Advertisement: