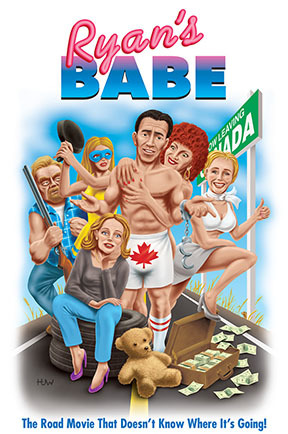 Don't be fooled by the low-brow cover. The tagline, on the other hand, is quite accurate.
Advertisement:

Ryan's Babe is a Canadian thriller film directed by Ray Ramayya, PhD, and released in 2000. It follows the story of Ryan, an unfortunate college kid that is on the run from the father of his love interest, Connie, after she supposedly attempted suicide after an argument with her. A series of events then befall upon Ryan as he makes his way south of Saskatchewan and soon finds himself in the United States with nothing but a few bucks and the clothes on his back.

Only airing on a Canadian premium cable TV channel a few times in its year of release, the film languished in total obscurity until a VHS screener was found in a dumpster, literally, by Tyler Baptist, founder of Canadian B-movie distributor Videonomicon. Having been fascinated by the film, he arranged for a limited home release. It didn't get attention of particular significance until it was featured on RedLetterMedia's Best of the Worst.