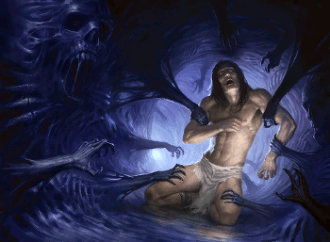 Yoda: That place... is strong with the dark side of the Force. A domain of evil it is. In you must go.
Luke: What's in there?
Yoda: Only what you take with you.
— Star Wars: The Empire Strikes Back
Advertisement:

Whether it's The Lost Woods, a swamp, the room at the heart of a Haunted House, or an eldritch Dark World reflection of our own, this place likes messing with your head. It will conjure up phantoms from your past to taunt and torment, force you to face your worst flaws and greatest failures, all while it moves walls and landmarks to keep you lost and trapped until you die... or forever.

The place could be tainted with the Dark Side, beckoning ghosts or causing too-real hallucinations. It might be a malicious Genius Loci that feeds on anguish. Whoever or whatever is behind the emotional onslaught won't outright kill anyone... at least not at first. It usually drives those it torments to suicide, uses Fright Deathtraps, or directly pits you against lethal physical enemies such as the Enemy Without. Sometimes however, it can be stopped the moment the victim says "I'm Not Afraid of You!" and/or reaches an emotional epiphany.

In fact, the purpose of the place could even be as a center of emotional confrontation and healing. Healing with a high burnout rate, but healing nonetheless. It's also worth noting that individuals may create these places or similar effects themselves. Telepaths and Masters of Illusion absolutely love to use this on enemies, and the Artifact of Doom may use it as a defense.

See also Epiphanic Prison, which can overlap, and Vision Quest. Compare Room 101 (which is this trope as a small part of a larger, more general-purpose location) and Black Bug Room (the Mental World equivalent). Contrast Happy Place, and Lotus-Eater Machine. See also Mental Monster for examples in which the Monster of the Week is based off the characters' mental or emotional struggles.