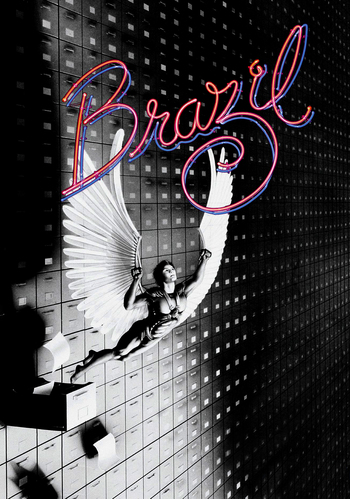 It's where you're going.
"I do assure you, Mrs. Buttle, the Ministry is very scrupulous about following up and eradicating any error."
Advertisement:

A 1985 film by director Terry Gilliam, depicting one man's futile struggle against a futuristic (and heavily decayed) governmental bureaucracy, drawing very heavily on George Orwell's 1984 — although Gilliam admitted to not having read 1984 when he directed Brazil. The film stakes a serious claim towards being the most definite and ghastly example of Executive Meddling in the entire history of cinema. If you're not watching the director's cut, you're not watching the real thing.

Especially notable for its imaginative and depressing "Somewhere In The 20th Century" setting, involving a Used Future (or past) of poorly-functioning Schizo Tech, a regime-mandated case of Too Many Ducts covering everything and anything. Along with Blade Runner and Max Headroom, it set the standard for 20 Minutes into the Future production design, scrambling the near future and the recent past into a vaguely familiar alternate present.

Not to be confused with the large country in South Americatrivia which overthrew their military government the year the film was released, or the phantom island

from Irish mythology that appeared in fellow Python Terry Jones's film Erik the Viking. The title actually refers to a recurring musical motif involving the brazilian tune "Aquarela do Brasil", which features prominently throughout the soundtrack.