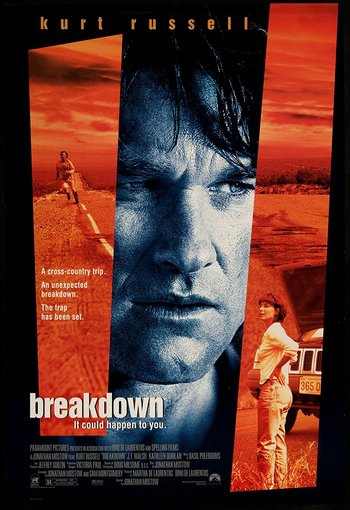 Breakdown is a 1997 thriller written and directed by Jonathan Mostow, starring Kurt Russell and Kathleen Quinlan.

Jeff Taylor (Russell) and his wife Amy (Quinlan) are driving cross-country from Boston to San Diego. The first sign of trouble is a barely-avoided collision with a truck, followed by meeting its driver, Earl, (MC Gainey), at the gas station. Not long after leaving the station, their vehicle breaks down. A trucker named Warren "Red" Barr (J. T. Walsh) stops by and offers to take Amy to a nearby diner, from where she can hopefully call for help. Jeff soon finds out that their vehicle had a very specific problem: disconnected wires. And when he gets to the diner, Amy is nowhere to be seen. The rest of the movie follows Jeff as he struggles to find his wife.