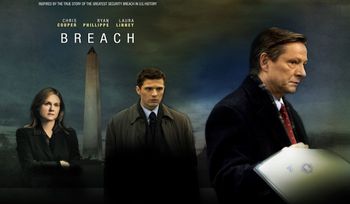 Breach is a 2007 film written and directed by Billy Ray.

It tells the Real Life story of the capture of notorious FBI spy Robert Hanssen. The story is told from the POV of Eric O'Neill, a junior FBI agent who was assigned to be Hanssen's assistant as part of the investigation to bring Hanssen down. Ryan Phillippe stars as O'Neill with Chris Cooper as Robert Hanssen. Laura Linney is an FBI counterintelligence agent investiganting Hanssen.