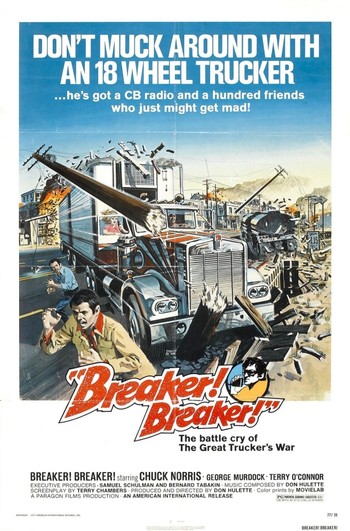 Breaker! Breaker! is a 1977 action movie directed by Don Hulette and starring Chuck Norris in his first lead role.

Norris plays John David "J.D." Dawes, trucker, badass and all-around nice guy. After JD's younger brother, Billy, goes missing in the middle of his first solo freight run, he and his sweet custom van go out to the notorious town of Texas City, California. There he befriends Arlene (Terry O'Connor), a waitress and single mom and the only person in town who isn't openly hostile to him (other than Arney, the mentally challenged gas station attendant). He runs afoul of town patriarch Judge Joshua Trimmings (George Murdock) and his band of corrupt deputies led by Sgt. Strode (Don Gentry).

There is a reason this film usually isn't mentioned among Norris' other early works like Good Guys Wear Black or The Octagon. The script is threadbare, the acting is sub-par and the entire film has a no-budget exploitation feel (without the exploitation elements).

The film is also available as a RiffTrax Video on Demand download.