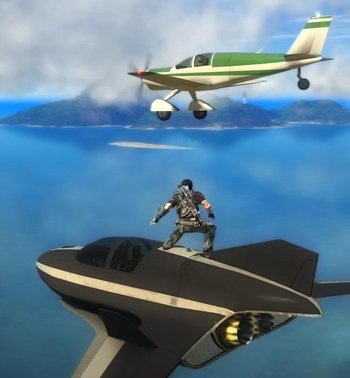 Just because the car's locked doesn't mean you can't go along for the ride. Just hop on top or side of the car, and hold on.

This is popular in many cop shows; our hero can be counted on to leap to the roof of a speeding getaway car at least once per season. Alternatively, he can jump onto the hood and glare at the driver while said driver tries to shake him off. Larger vehicles can also be used (particularly popular version is jumping onto a tall vehicle from an overhead bridge) — if it's a truck, for example, our Hero will often need to climb forward to the cab somehow. (You can also climb about on trains, but they're a bit different since they don't swerve about.)

Busted by the MythBusters, who found it much less safe in reality than on the screen.

For example, in Real Life it is incredibly difficult to hold on to a car even at low speeds, and at high speeds it is impossible to do so. It may be slightly easier to hold on to a train, but all of your effort has to be spent in just holding on and you have to be on top of a car that isn't rounded or containing hot liquids — plus, tunnels can cut too close to the roof for a standing person to survive passing through one. Aircraft — at least when we're talking jets, spacecraft, or anything that is flying at a sufficiently high speed and altitude — are literally impossible to stand on the outside of, and doing so is certain death.

Two variant forms have become outdated with modern car designs, but may be seen in older media. For a stealth Outside Ride, jump onto the back bumper and hold on tight (the technical term is Skitching). This is often a convenient way for the hero to get to the villain's hideout. A more obvious method would be to stand on the running board, though if the driver's not paying attention you might be able to crouch underneath the window before he sees you.

See also: Hood Hopping, Traintop Battle, Underside Ride. Punk in the Trunk (the second option) is a more modern version of riding on the back bumper, which isn't to say characters in older works can't do it. May precede a High Speed Hijacking.

Julie riding on top of Ship

If she's not using Ship's mechsuit form, Julie fights by riding on top of him and not falling off, no matter how much he swerves.

Julie riding on top of Ship

If she's not using Ship's mechsuit form, Julie fights by riding on top of him and not falling off, no matter how much he swerves.