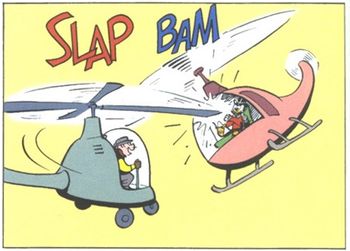 Propeller fight!
"PHHPPPBBB"
— The sound effect when Sweet Bro is on the receiving end of this trope.
Advertisement:

The hero is being chased by some Mooks in a helicopter. He's probably on a car or motorbike (rarely running). The baddies are shooting automatic weapons at him, but they've of course attended the Imperial Stormtrooper Marksmanship Academy. But wait, the hero has just gotten himself into a wide open space with no exit! He's trapped!

The helicopter first comes to a low altitude, and you may think the baddies would just open fire en masse and rain hot lead all over the place because, hey, there's only so many bullets a hero can dodge. But no, that'd be too easy.

Instead, the helicopter first hovers right above ground, then tilts forward at a very steep angle. It then proceeds to slowly move forward, its rotor becoming a deadly, razor-sharp weapon that slices and dices everything it touches. All sorts of objects, people, even vehicles are thrown aside and shredded to pieces by the Helicopter Blender.

The hero seems doomed, but at the last moment, he always finds a way out (bonus points if it involves jumping over the helicopter).

Trying this in real life, is, of course, very, very ill-advised. Helicopter blades are quite fragile - or at least, fragile if slamming themselves against something very hard. Even birds damage blades. Thus, any helicopter pilot who tries this may well succeed in killing both themselves and their target, most especially if airborne.

The third upgrade for the top path of BTD6 Heli Pilot. It allows the rotors to pop Bloons.

The third upgrade for the top path of BTD6 Heli Pilot. It allows the rotors to pop Bloons.