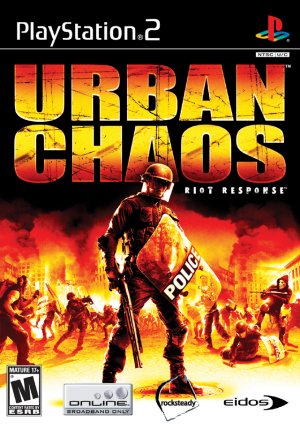 Our hero, with a standard issue AFGNCAAP helmet.
"Do you remember my early work? Flawed, but it showed promise."
— Calendar Man, Batman: Arkham City
Advertisement:

Urban Chaos: Riot Response is a First-Person Shooter developed by Rocksteady Studios and published by Eidos Interactive for the PlayStation 2 and the Xbox. It's Rocksteady's first game prior to hitting it big with Batman: Arkham Asylum. It is generally well-received for having simple and enjoyable gameplay, moderate difficulty, expansive content, and strong multi-player.

In it, an unnamed American city has been turned into a war zone by crazy terrorists known as the Burners. You play as Nick Masonnote Not to be confused with the drummer of Pink Floyd, ace of the T-Zero Riot Response unit, which was formed to fight terrorists and take the city back.

Urban Chaos: Riot Response doesn't come anywhere near the level of the more well-known shooters like Halo, or even Killzone, but this one stands on its own by doing away with realism and story, instead giving you a ton of weapons and hordes of enemies to use them on. Think of it as stress-release.

Unrelated to the 1999 Third-Person Shooter Urban Chaos (even though Eidos published both).