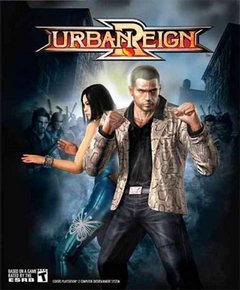 Urban Reign is a Beat 'em Up from Namco for the PlayStation 2 released in 2005. In it you play as Brad Hawk, a "brawler for hire" in the crime-ridden but strangely almost gunless city of Green Harbor. He is hired to find a missing gang member, who has become the catalyst for gang wars across the city. However, the more gangs he beats down, the more answers he gets and the more complicated things become.