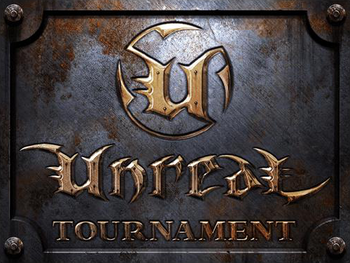 "In 2291, in an attempt to control violence among deep-space miners, the New Earth Government legalized no-holds-barred fighting. Liandri Mining Corporation, working with the NEG, established a series of leagues and bloody public exhibitions. The fight's popularity grew with their brutality. Soon, Liandri discovered that the public matches were their most profitable enterprise. The professional league was formed: a cabal of the most violent and skilled warriors in known space, selected to fight in a Grand Tournament. Now it is 2341. Fifty years have passed since the founding of Deathmatch. Profits from the tournament number in the hundreds of billions. You have been selected to fight in the professional league by the Liandri Mining corp. Your strength and brutality are legendary. The time has come to prove that you are the best. To crush your enemies. To win the Tournament."
— Opening Monologue
Advertisement:

Unreal Tournament is a multiplayer-oriented First-Person Shooter developed by Epic Games and Digital Extremes and published by GT Interactive set in the Unreal universe and released for PC in 1999, and for PlayStation 2 and Sega Dreamcast in 2001. It is considered a spinoff of Unreal, beginning development as an Expansion Pack before the plethora of changes made to the game's code forcing the development team to go the standalone route.

The game focuses on a tournament (involving both humans and aliens) which started as a way to occupy deep-space miners and eventually grew to become a massive sport event watched by countless spectators. The single-player story was, at best, glorified bot matches to prepare the player for the multiplayer mode, and featured the player choosing a team, a face and a name, and fighting in different arenas with different weapons, different rivals, and in some of these matches with the team he/she has chosen, until he/she reaches the Tournament finals and fights against Xan Kriegor, the Tournament's first and still-current champion.

As for the gameplay-side of things, the game evolves upon the multiplayer model set by Unreal by mostly polishing it. Players fight in enclosed arenas for supremacy with two starting weapons and a plethora of more powerful weapons scattered across the fighting area. The weapon roster was reorganized and polished accordingly, with annoying features of some weaponsnote The Automag's reloading, the Bio Rifle's alternate fire firing prematurely an underwhelming multiplying glob, the Stinger and Dispersion Pistol's whole existence... being gone while also introducing more interesting modes for existing weaponsnote The Enforcer doesn't need reloading anymore, the Bio Rifle now allows the players to hold the charge and release on command, the Pulse Gun replaces the Stinger, and the DP is nowhere to be seen... and more punch-packing effects for the weapons making them feel more powerful than their counterparts. In addition, some new weapons were added to the player's arsenal: the Impact Hammernote a melee, repurposed mining piston as an Emergency Weapon with a Charged Attack for a primary mode and an Attack Reflector as a Secondary Fire, the Chainsawnote a melee weapon only available via the "Chainsaw Melee" mutator, whose primary fire shreds upon the closest enemy to the weapon, while alternate fire is an instant One-Hit Kill via headshot, the Translocatornote a teleportation device used to reach otherwise unreachable places, the Pulse Gunnote a pistol which unleashes hot plasma shots and also has a straight plasma beam with quite the range as an Alternate Fire and the Redeemernote A portable missile launcher whose projectile has a huge explosion radius upon impact. On the movement side of things, dodging was polished and the reworked physics allow certain tricks in maps that weren't exploited back in Unreal. The GUI eschewed the console-like interface which Unreal had on release and adopted a Windows-like scheme with menus and dialogues which was so well received, it got ported back to Unreal for both Return to Na Pali and its Gold re-release.

The game features six playable modes, four of which can be found in the aforementioned Single Player mode:

The game gained lots of critical acclaim, and was considered by many reviewers as a superior game to its most direct rival, Quake III: Arena (although Quake III lasted far longer in the competitive scene). Its success was such that Epic Games decided to entirely focus on the MP side of the franchise for the future.

There are also four official releases as small and free Expansion Packs, called "Bonus Packs". These were done respectively by Epic Games, Digital Extremes, Cedric "Inoxx" Fiorentino (the creator of the map CTF-Face, a.k.a. "Facing Worlds") and by the three of them for Christmas 2000.note This is the only non-retail content to be mentioned in this page, as they are official releases and not third-party content.

Near the end of 2019, Epic Games granted an NDA to the folks at OldUnreal

Some characters from this game went big for the remainder of the franchise, as the character sheet shows.

Game mods with their own pages

Tournament Tropematch. 150 tropes wins the match. Press Fire to start.note Waiting for ready signals. (Use your fire button to toggle ready!) You are READY!

"Congratulations, you're the winner!"