Game of the Year Edition 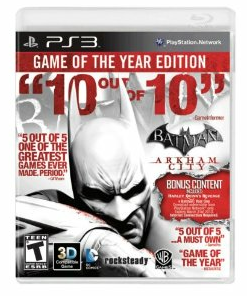 It's the Game of the Year! Guest-starring Batman.
Advertisement:

When a game publisher wants to cash in on a title that critics cannot stop gushing about come awards season, how do they do it? Why, by bundling the game with all released DLC and slapping a Game of the Year Edition sticker on it, of course!

This trope refers to the increasingly common practice of bundling a critically acclaimed title with extra content (such as paid DLC) at a reduced price (much to the chagrin of those who bought everything separately). Theoretically, it's a win-win situation: gamers who may have held out purchasing a game released during the holiday rush or award bait season can jump right in for a reduced price, while publishers can make a quick buck on a title which requires very little publicity to market (at least in comparison to a brand-new title). Right?

Unfortunately, these bundles are usually released within weeks of the last round of DLC hitting the market, leaving a bitter taste in the mouth of many a gamer. Furthermore, some have begun to avoid purchasing DLC packs until they are released as part of the inevitable GOTY edition or packaged together at a reduced price online through the likes of Steam, even if such a package isn't planned. It's even worse for developers, who lose potential sales due to consumers being reluctant to pick up the base game if it will be inevitably be going for much cheaper within less than a year and include all DLC content. To combat this problem, developers have started to sell packages of "the game and X future DLCs", including in preorders.

This trend most likely started with Bethesda's The Elder Scrolls III: Morrowind, which was added to with the Tribunal and Bloodmoon expansion packs, and later had these coupled with the main game in a cheaper re-release. However, earlier examples of "Game of the Year Editions" were titled various things ("Deluxe", "Complete", "Gold", "Battle Chest") and similarly bundled (main game plus the expansions).

Not to be confused with a certain Belgian-Australian musician that you used to know. For the fanfic trope where this is applied to a universe, please see Sudden Game Interface.