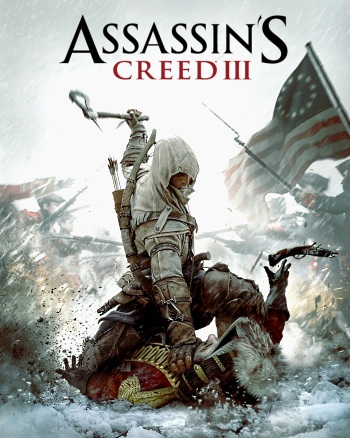 "In the name of liberty, I will fight the enemy — regardless of their allegiance."
"I realise now that it will take time. That the road is long and shrouded in darkness. It is a road that will not always take me where I wish to go. But I will travel down it, nonetheless."
— Ratonhnhaké:ton (Connor Kenway)
Advertisement:

Assassin's Creed III is the fifth main entry and the third numbered entry in the Assassin's Creed series. The game skips a few hundred years and takes us to The American Revolution by way of the French and Indian War as a half-English/half-Native American Assassin named Ratohnhaké:ton, a.k.a. Connor Kenway, and was released on October 30, 2012 for PlayStation 3, Xbox 360 (Xbox One via backward compatibility), Wii U and PC in conjunction with a PS Vita exclusive, Assassin's Creed III: Liberation (which later became available on PSN and XBLA in early 2014).

Born to a Native American woman and a British man, Connor spends his early years in a Mohawk village on the American frontier. His village is soon attacked and burnt down. Believing the Templars responsible, he becomes an Assassin and joins the fight against them, only to be caught up in the Revolution. He fights alongside historical figures such as George Washington while using the cover of the war to seek out his targets. Meanwhile, in 2012, Desmond Miles and the modern Assassins plumb Connor's memories for clues to unlocking the Grand Temple, which offers the last hope of saving the world from impending destruction.

Assassin's Creed III brings an overhaul to the franchise, including a completely new graphics and gameplay engine that allows for fluid free-running through natural environments. Weather plays a significant role, as the game takes place over all four seasons, with strong emphasis on the harsh winter environments of upstate New York. In addition, the game features a naval combat system wherein Connor can take command of a ship and engage British and pirate vessels on the Atlantic Ocean and Caribbean Sea.

The multiplayer section of the game has also evolved, moving from the internal training of Templar agents in Abstergo facilities via the Bleeding Effect to being an actual product of Abstergo Entertainment, aimed at the mass market and "based on real memories of real history". Our old friend Erudito is back, however, hacking the program as the players play it, and revealing that everything the "game" shows is twisted to fit the Templar purposes.

Ubisoft released a DLC for Assassin's Creed III titled The Tyranny of King Washington, spread over three parts. It follows Connor as he wakes up in an Alternate History where George Washington found an Apple of Eden, went crazy, and took control of the United States, declaring himself king. Tropes for it go at the bottom of the page.

There is also a tie-in novel called Assassin's Creed: Forsaken, which isn't focused on Connor, but instead his father Haytham.

Followed up by 2013's Assassin's Creed IV: Black Flag, which vastly expanded upon the naval combat system introduced in AC III, and with a new historical player character (Edward Kenway, Connor's grandfather). Subsequently in 2014, there was the Interquel Assassin's Creed: Rogue, which revisits the Prolonged Prologue set in the Seven Years' War as well as subplots and characters such as Haytham and Achilles.

The Remastered Edition of this game, its DLC and Liberation were included in the Assassin's Creed: Odyssey Season Pass, as well as seeing a standalone launch on Steam and Uplay in 2019.

This page assumes that you have played the first four games of the franchise. All spoilers for those four works will be unmarked. You Have Been Warned! 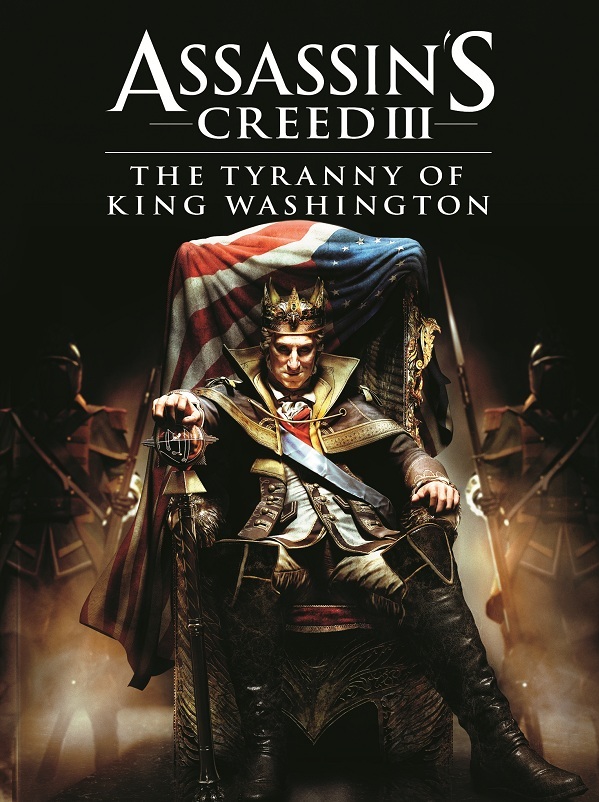 Some time after the main game, Connor wakes up to find himself in a changed landscape. A world where the American Revolution became twisted and its greatest hero turned into a tyrant who oppresses the same people he once liberated.