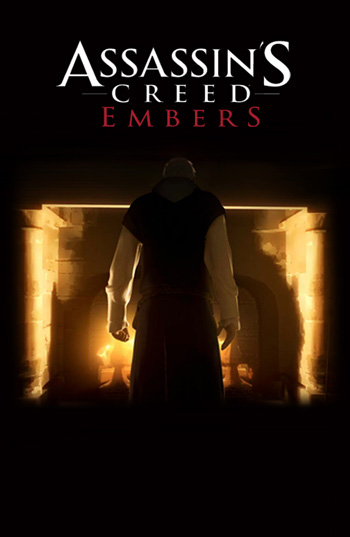 "I cannot seem to leave my past behind me. I started this act of my life so late, Sofia. I knew I would not have time to do everything. Now I worry I don't have enough time to do anything."
— Ezio
Advertisement:

Assassin's Creed: Embers is an animated short by Ubiworkshop set in the Assassin's Creed universe. It details the final days of the legendary Master Assassin Ezio Auditore.

After the events of Revelations, Ezio has retired from his former life to live in peace and raise a family with Sofia in the Tuscan countryside near the city where he was born and raised, Florence. Age has finally caught up to the former Assassin, and he feels his time on this world grows short. His life takes a turn for the less mundane when it is interrupted by the sudden arrival of a female Assassin. The young Shao Jun desires his guidance on how best to lead and rebuild her order in China. However Ezio wants nothing to do with the lifestyle he put behind him.

The short was included with both the signature and collector editions of Assassin's Creed: Revelations.