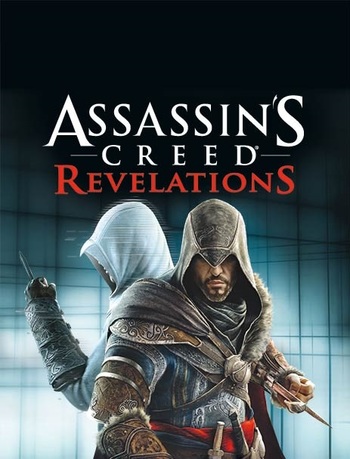 "Fate may command I die before the answers are discovered. But an Assassin takes orders from no one."
"I have lived my life to the best of my ability. But I have not been able to escape fate... anger... or pain. Bring me the answers, and the road that leads to truth. Reveal to me once and for all how all of this will end."
— Ezio Auditore da Firenze
Advertisement:

Revelations is unique in that it places you in control of the three primary characters in the Assassin's Creed story thus far: Ezio Auditore from Assassin's Creed II and Assassin's Creed: Brotherhood, Altaïr ibn La-Ahad from the first game, and Desmond Miles — the descendant that links the aforementioned Assassins together. Both Ezio and Altaïr have their stories concluded in this game.

In the 16th century storyline, Ezio travels abroad to Constantinople at the height of the Ottoman Empire, where an increasing number of Templars threatens to destabilize the region, and a lot of information about the Precursor society is revealed. He goes on that journey to access the secrets of the Library of Altaïr in Masyaf, and to do so, must collect a series of discs. Contact with these discs allows him to relive some of Altaïr's memories (creating an Inception-like memory-within-a-memory for Desmond if you will). The Altaïr memories fill in gaps in his story from before, during, and after the events of the first Assassin's Creed game.

Back in 2012, Desmond finds his mind trapped deep within the Animus, along with that of his predecessor, Subject 16, and he must continue to relive Ezio's memories if he ever wishes to wake up again. Revelations serves as a sort-of loop closer, tying up storylines and plot threads started in the three previous games.

A multiplayer component is also present, as are new weapon and tool systems. The collectors' editions include an animated film, Assassin's Creed: Embers, that stars an aged Ezio and fully closes his story arc.

The game, alongside Assassin's Creed II and Brotherhood, were re-relased in November 2016 for 8th generation consoles as part of the "Ezio Collection". In February 2022, this trilogy-compilation was released on the Nintendo Switch.

After Revelations, the series continued with the next numerical entry, Assassin's Creed III, featuring a new historical protagonist as well as a new era and setting, and continuing the modern-day plot involving Desmond.