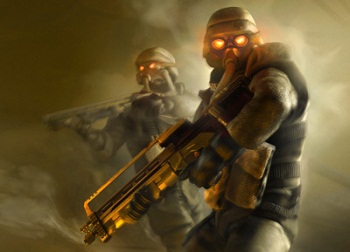 Surrender now, and we'll kill you painlessly.
"What the enemy cannot see, they cannot fight. What they can see, they will soon learn to fear..."
— Warhammer 40,000
Advertisement:

You can tell by looking at them, these are no ordinary Mooks. Every aspect of them is designed for maximum intimidation; their boots strike the ground with a despair-inducing tromp and their loud breathing sends chills up the enemy's spines. Their uniforms are black, possibly emblazoned with skulls, and almost always have a mask that makes them seem less human. Enemy soldiers would rather surrender than fight them, but they are trained to show no mercy. Every action they take is meant to induce Mook Horror Show in the Red Shirt Army and civilian populace.

In short, scary mooks, elite or otherwise. Expect a lot of Putting on the Reich.

Has nothing to do with the Web Comic Troops of Doom, the SNES game Doom Troopers, Doom Tropes or the Legion of Doom.