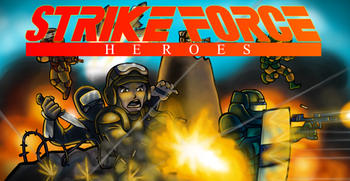 is a web game that was released in 2012 by Justin "Juice-tin" Goncalves and Mike Sleva, with voiceovers by Sean "sonicmega" Chiplock.

It is a platformer that has heavy elements of a 2D Shooter. The game gives you four classes to play from, each with their strengths and weaknesses. You can also purchase different perks and new weapons as you play on.

It is also given a sequel.

An app game was later released called Strike Force Heroes: Extraction. In 2021, Justin and Mike announced an upcoming remaster of the trilogy on a modern engine with updated graphics, additional content and balance changes. It will be released on Steam and you can follow its development here