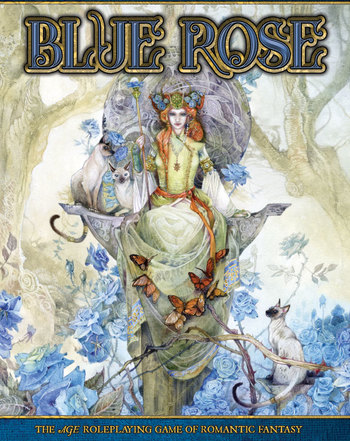 The RPG where you can play a cat with a human Familiar.
Advertisement:

Blue Rose is a fantasy tabletop role-playing game published by Green Ronin in 2004. Its innovative mechanics, based on a revised version of the d20 System, formed the basis of Green Ronin's generic True20 system.

In March 2015, Green Ronin announced plans to revive the setting with rules based on the AGE system, which was originally developed for the Dragon Age RPG. In June 2015, they ran a successful Kickstarter for the new edition

, and in 2017 began publishing short fiction set in Aldea under their Nisaba Press fiction line.

Blue Rose aims to emulate the genre of fiction the game's writers describe as "romantic fantasy" — that is, Feminist Fantasy of the sort published by authors like Mercedes Lackey, Tamora Pierce and Diane Duane. The setting is the world of Aldea, which superficially resembles a Medieval European Fantasy setting but is actually post-apocalyptic, the world having been devastated by wars between rival Sorcerer Kings a few centuries back. Player characters are usually agents of Queen Jaellin of The Good Kingdom of Aldis, defending queen and country against threats both internal and external.

Most action is assumed to take place within the land of Aldis itself. While full of non-traditional takes on fantasy races (Psychic Animals, Half-Elf survivors of a genocide, androgynous Merfolk, and Orcs and Dark Elves that abandon their warlike ways), the setting also has a lack of certain ubiquitous tabletop fantasy creatures (Dwarves, Halflings, High Elves) with more emphasis instead placed on the numerous human nationalities that comprise Aldis' people and their neighbors.

Prominent features of the setting are deliberate outreach to women and LGBT players through their incorporation into the setting's lore, an emphasis on interpersonal relationships and social conflict instead of strict hack-and-slash combat, and the ability to play as a Psychic Wizard Badger with a human Familiar.

"For Aldis and the Queen!"