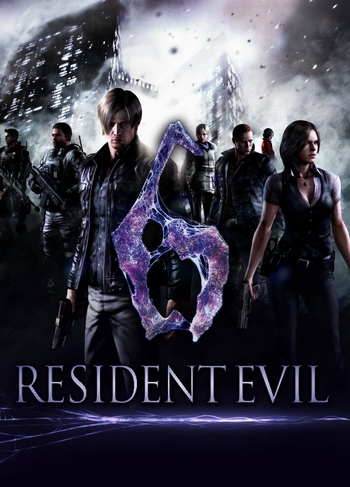 The gang's all here.
"Our hiding places diminished ...we turned to hope... but she has fled..."

Resident Evil 6 — the ninth main installment of the Resident Evil franchise, released for the PlayStation 3 and Xbox 360 in 2012 and the PC in 2013 (as well as PlayStation 4 and Xbox One in 2016, and Nintendo Switch in 2019) — features multiple campaigns with their own controllable characters, unique settings, gameplay styles, and tones. The partner system from Resident Evil 5 also returns, and Capcom included additional multiplayer options to boot.

Fifteen years after the Raccoon City Incident, President Adam Benford prepares to reveal everything about what happened on that day to the public. After Leon Kennedy arrives in Tall Oaks to discuss the reveal, he finds the President transformed into a zombie. Leon kills the President to save Helena Harper, a Secret Service agent with a few secrets to hide, and the two then team up to escape Tall Oaks and discover the source of this new viral outbreak.

Halfway around the world, BSAA agent Chris Redfield and his sidekick Piers Nivans arrive in the coastal Chinese city of Lanshiang to help suppress a bioterrorist threat. Along the way, they encounter the elusive Ada Wong — who still has an agenda of her own, natch — as well as a few new surprises. As the city becomes overrun with zombies and the global threat of the newly-discovered C-Virus becomes clearer, Chris has to decide who to trust in order to help save humanity.

Alongside Chris and Leon's stories, a third story follows mercenary-for-hire (and series newcomer) Jake Muller as he teams up with Sherry Birkin, who wants to find a cure for the C-Virus. As the illegitimate son of the late Albert Wesker, Jake's blood may hold the key to stopping this new threat to humanity, but Jake isn't exactly happy about having that responsibility thrust upon him.

All three stories converge together as Chris, Leon, and Jake try to stop the parties responsible for the C-Virus outbreak and save the world — but has the world already been lost?

After clearing all three main scenarios — or not, if you have a patch — players gain access to a special fourth scenario that follows Ada's story.