Tropes relating to the characters introduced in Resident Evil 6.

The mysterious third protagonist of Resident Evil 6. Coming from a poverty-stricken Edonian family, Jake became a mercenary early on in order to afford medical treatment for his chronically ill mother, who died shortly thereafter. Left alone in the world, he turned his only concern into money. His life comes to a turning point when he meets Sherry Birkin, who claims he's the world's best hope of salvation — and learns his father, who left his pregnant mother, was no other than Albert Wesker.

Leon's companion in 6. She is a government agent who holds herself responsible for the virus outbreak in Tall Oaks.

A young BSAA operative serving under the North American branch's Special Operations Unit Alpha Team, and Chris's partner in RE6.

Helena's little sister, who was kidnapped by Simmons and used as a C-Virus test subject. Avenging her is Helena's driving motivation throughout the game. 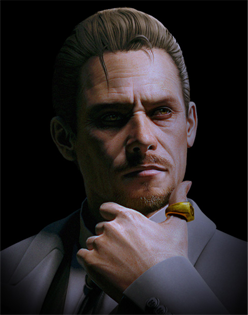 The US National Security Advisor, and an expert on bio-terrorism. 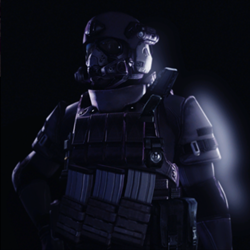 A character that exists as a co-op partner for Ada Wong. Unlike all the other cooperative partners, he is not a factor in the overall story line, and is excluded from single player as a result. Should the player choose to play with another player, he will appear to assist in combat. He cannot interact with puzzles and in important events, having to rely on the first player (Ada Wong) to do everything. He IS fully playable in the other extra modes, however.

The President of the United States in 2013 and a personal friend of Leon's. He and Leon went back decades together, when he was implied to be the one who recruited the latter into the Division of Security Operations, a federal bio-terrorism response unit that succeeds the earlier Federal Bio-terrorism Commission, following the Raccoon City outbreak. He is assassinated-by-proxy during the Tall Oaks outbreak, by being exposed to the C-Virus, which zombifies him and forces Leon to put him down.

A member of the faculty at Ivy University. He asks Leon and Helena to help him find his missing daughter.

A survivor who joins Leon and Helena.

The mysterious founder and leader of Neo-Umbrella.

J'avo & Complete Mutations
Humans directly infected with the C-Virus, as opposed to those caught in the airborne variant, who become mere zombies. J'avo do not lose their intelligence and gain increased durability and ferocity, but it is their ability to regenerate wounds by triggering selective cellular mutation, allowing them to transform into a variety of different forms, that truly makes them dangerous. In rare cases, they may enter cocoons and undergo a complete genetic transformation, becoming a monster called a Complete Mutation.

A Tyrant-like B.O.W. used by Carla Radames to pursue and capture Jake Muller. 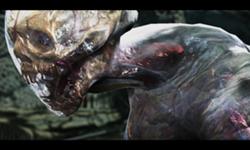 The ultimate creation of Carla, designed to infect the world.