Eight total strangers that were all within the same bar when the zombie infection hit Raccoon City. The eight of them join forces to fight the outbreak.

A police officer who attempted twice to become a member of S.T.A.R.S. but failed. He's cheerful and brave, but somewhat irresponsible; he keeps cheap liquor in the fridge at the RPD, and his bar tab is apparently huge and well overdue. Kevin was a member of the unit Leon was set to join, and they only met each other once, but are amicable with one another. He has his kick ability, and a .45 handgun to start off with. File #2 grants him extra ammo at the start, and an option to use a more powerful tackle.

A waitress at J's Bar, Cindy is very kind, putting others' needs before hers. She carries an herb case that allows her to carry a massive amount of medical supplies, and starts a scenario with enough herbs in the case to make two 100% mixed herbs. Cindy can duck attacks, allowing her to completely avoid almost any injury if you time it right. File #2 then provides her a bandage that prevents and recovers bleeding for anyone who equips it, while also giving them the ability to cure the "Bleed" status of wounded teammates they carry.

Mark is a veteran of the Vietnam War, and currently employed as a security guard. Fortunately, his wife and son live outside the city. Mark is overweight but very strong, and can move objects by himself that would usually require two people, and can rear back for a more powerful melee strike while equipping certain melee weapons (with File #2 giving him the option to do the same above and below). He has the most health of any survivor and has the ability to block.

Alyssa is a reporter for a local newspaper in Raccoon City, and an acquaintance of Ben Bertolucci's. She's a physical fitness fanatic, and her SP items that don't have to do with journalism are usually health food or exercise gear. She has a handful of lockpicks to utilize, and is able to jump away from enemies in pinch situations. In File #2, she begins the game with a stun gun, which can inflict startlingly high amounts of damage at close range. She also has a slower, less powerful version of Kevin's aiming ability, allowing her to deal extra damage with single handgun and magnum shots.

In 2016, she writes a newspaper article regarding disappearances in Dulvey, Louisiana, making her the only confirmed survivor so far.

A plumber who keeps to himself, David is very reserved and silent. He has a tool box handy, with winches he can toss at enemies to stop them, a pocket knife to use as a weapon, junk parts to repair broken firearms, and duct tape to craft two objects together to make a powerful weapon. He can also do a three hit combo with the knife, where File #2 gives him an additional hit for front, above and below. File #2 starts him off with a lighter.

A subway worker, Jim relies on his good luck to survive. Jim is capable of playing dead, which makes enemies ignore him as long as he stays flat on the ground. Unfortunately, while Jim is "dead," his virus gauge skyrockets. He starts off with a coin, and File #2 provides him with an additional coin as well.

A kind doctor and recent divorcee. He manages to remain calm and polite even under stress. George's hobbies include hiking and collecting watches. He has the ability to use herbs to turn into pills to conveniently carry them in quantities, and he has the ability to deliver a counter-tackle. File #2 gives him a pill launcher, allowing him to shoot pills from a distance.

A former Umbrella researcher, Yoko witnessed the attack on William Birkin and tried to get the hell out of town. Unfortunately, she didn't see the outbreak coming and wound up trapped. Yoko has the lowest health of any survivor, but her virus gauge climbs the slowest and she's got a backpack that gives her another four item slots. She also has an evasion move that, while initially seeming useless, gives her an enormous invulnerability window.

Mark's friend and fellow co-worker. If Mark is played in Outbreak, the game starts off with him appearing to be drunk or not feeling well, and even has him stumble onto the floor. When the game begins, the player has the option to lend him a shoulder to help him out of that spot. 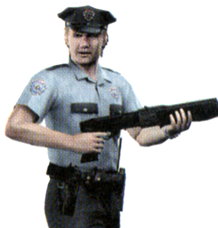 An officer in the RPD who is tasked with helping suppress the zombie hordes. He helps the survivors from J's Bar escape from the undead, but ends up sacrificing himself. 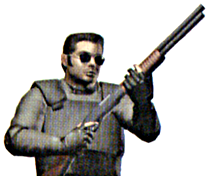 The leader of an USS squad. He eventually decides to betray Umbrella and escape along with Linda, Carter, and any other survivors surrounding the area. 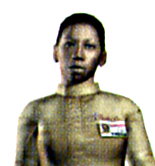 A renegade scientist working for Umbrella, Linda is making plans to escape the city when the survivors encounter her. She holds the key to curing the T-Virus, if she can be successfully brought out of town.

Another Umbrella scientist, Carter is a little too enthralled by the sheer power of the Tyrant. 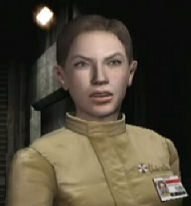 In the wake of the attack on William Birkin, Monica murdered several of her former co-workers at Birkin's laboratory and tried to escape with some of his discoveries. It didn't go well for her. 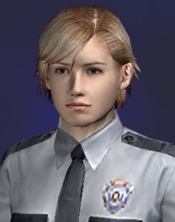 A short blonde patrolwoman with the RPD, Rita is one of the last surviving cops in the building. 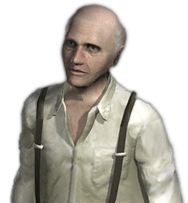 A seemingly harmless old man living in an abandoned hospital near the Arklay Mountains. In truth, he's a deranged psycho who's been murdering any survivors that happen to wander by, as the "Axe Man".

Regan headed into the woods with her daughter Lucy in an attempt to escape Raccoon City, and ended up trapped inside a cabin as mutated insects invaded the forest. 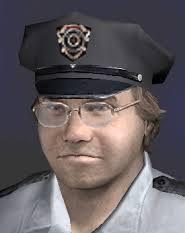 A doctor working at the Raccoon Hospital, who assists the survivors in getting the elevators working before falling victim to the Leech Man.

An Umbrella Scientist, Greg created the Thanatos Tyrant. Not wanting the corporation to mass-produce it, he began a plan to betray them, first by commissioning a Raccoon University Researcher to create a vaccine. Later, he unleashed Thanatos, who proved a grave danger to both the Umbrella Biologic Countermeasures Service and the Raccoon City survivors.