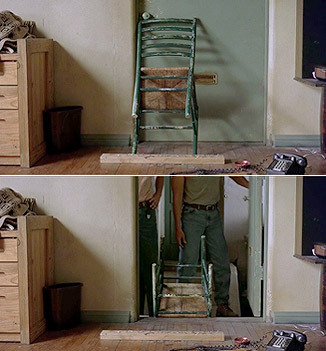 He could still trip over the threshold.
Amy: Will that door hold it?
The Eleventh Doctor: [sarcastically] Oh yeah, yeah, of course! It's an interdimensional multiform from outer space; they're all terrified of wood.
— Doctor Who, "The Eleventh Hour"
Advertisement:

When characters attempt to physically seal off access to a room, passageway or building, but are doomed to fail miserably due to poor choice of materials or bad tactical planning.

This trope can come in many flavors. A person on the run from a killer may choose to block a door with light and easily movable objects. Other times, Myopic Architecture can easily come into play; characters may put a serious effort into blocking a single door in a room with multiple exits and/or easily breakable windows. In comedic situations, the ineffective barricade may come in the form of what amounts to a (quite surmountable) waist high fence, or the character in question could simply forget that the door he's trying to block opens outward instead of inward.note Even if it seems that you blocked it in the right direction, watch out if you're in a hospital, as many doors are double acting or double egress — the door will open either way, or one door (in a double door) swings the opposite direction

This can also be seen when multiple characters are making serious attempts at fashioning a barricade of some sort, while one of their companions piles on extremely light objects like pillows or potted plants or else is steadily deconstructing their barrier in order to make his own. Occasions like these can at times serve as a lesson to not allow the Cloudcuckoolander to assist in defense planning.

A common comedic situation tends to occur where the barricade is being built, but the builders turn around and find that they have sealed themselves inside with what they were trying to escape. Sometimes the thing they were trying to escape may have even helped them construct the barricade while they weren't looking, or may have even handed them tools and materials. Either way, Hilarity Ensues. The Rule of Funny aspect of this trope is really played up, however, when what is an obvious Absurdly Ineffective Barricade is shown to actually work. In these cases, the barricade builders are often just as surprised as anyone else.

While the Absurdly Ineffective Barricade is often Played for Laughs, it can sometimes be used to show the effects of panic on a terrified character on the run. In the latter cases, the poor choice of defenses will often lead to the realization that the builder has made a fatal mistake... moments too late to do anything about it, of course.

Note that in order to qualify as an Absurdly Ineffective Barricade, there must be some obvious flaw on the part of the characters making it. If the defenses are well planned but the villain is powerful enough to burst through them anyway, it does not count. If the barricade itself is just fine, but the villain finds an inobvious way around it (say, through the nearby wall), that's not this trope, just Myopic Architecture.

A Sub-Trope of Rule of Funny. Contrast Berserk Board Barricade, Furniture Blockade, Insurmountable Waist-Height Fence. Concealment Equals Cover becomes a subtrope of this when subverted.