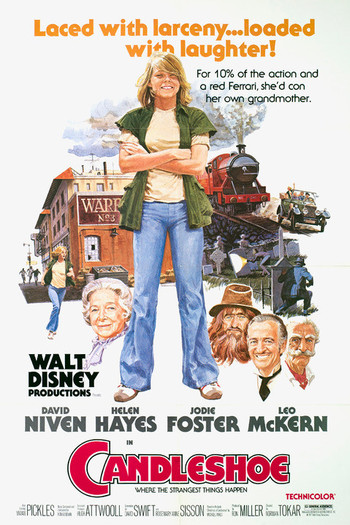 Candleshoe is a Disney live action film from 1977, directed by Norman Tokar and based on a book by Michael Innes, a.k.a. J. I. M. Stewart.

Fourteen-year-old Jodie Foster, already with "Oscar-nominated" attached to her name thanks to Taxi Driver, stars as Casey Brown, a street-smart and cynical foster kid living in Los Angeles. One day, she is discovered by con man Harry Bundage (Leo McKern), who realizes that she is the perfect double for Margaret, the long-lost granddaughter of Lady Gwendolyn St. Edmund (Helen Hayes), whose stately manor Candleshoe is alleged to contain a hidden treasure in pirate gold. Bundage, along with his partner-in-crime Clara Grimsworthy (Vivian Pickles), need someone on the inside to go through the Linked List Clue Methodology, and Casey is just the juvenile delinquent for the job. In exchange for a cut of the take and a red Ferrari, Casey agrees to travel to England, where Lady St. Edmund welcomes "Margaret" home.

But after joining the household, Casey discovers a terrible truth: Lady St. Edmund is penniless, and Candleshoe is on the verge of foreclosure. The only servant left is the butler, Priory (David Niven), who tries to hide the truth from Lady St. Edmund by pretending to be all the rest of the household staff. A group of local orphans taken in by the Lady (Veronica Quilligan, Ian Sharrock, Sarah Tamakuni, David Samuels) do most of the upkeep on the house and keep Candleshoe in the black by selling food grown on the estate at the local market, knowing that if Candleshoe is lost, Lady St. Edmund will be sent to a retirement home and they'll be returned to the orphanage.

Of course, Casey couldn't care less about any of this. She's in it for the money. At least that's what she keeps telling herself. But as Casey becomes a part of the first real home she's ever known, she decides to find the treasure in order to save Candleshoe—even if it means admitting she's nothing but a fraud.