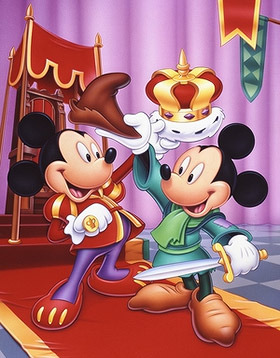 How fortunate that there happened to be another boy mouse with the same features in the roles they've always wanted.
"God bless the King—I mean the faith's defender;
God bless (no harm in blessing) the pretender;
But who pretender is, or who is King—
God bless us all—that's quite another thing."
— John Byrom
Advertisement:

Combination of Swapped Roles, Identical Stranger, Princess for a Day and Fish out of Water. Two physically identical people from different backgrounds swap roles (either by fate or by arrangement) and have to learn how to fake being each other. Usually, both are portrayed as being unhappy with their current lives and think the grass being greener on the other side. The Prince or wealthier character is often a Lonely Rich Kid who finds their lifestyle a Gilded Cage full of never ending lessons, people telling them where to go, how to dress, and to always be "proper", completely unbearable. They yearn for friends and playtime and to have the freedom to make their own schedule. The Pauper or less wealthy character is often a person who barely gets enough food and money to survive, struggles in poverty, can't afford to go to school, and yearns for a life with more wealth, luxury, and food. And the lesson they often learn is that the other person's life has its fair share of hardships too and that we often don't appreciate what we have until it's gone.

Comes from the story The Prince and the Pauper by Mark Twain, and is regularly used in Disney TV movies, but not commonly in TV episodes, unless twins are involved.

If one is literally a prince (or other royalty), there will usually be a plot by the Evil Chancellor to depose him underway when the switch happens.