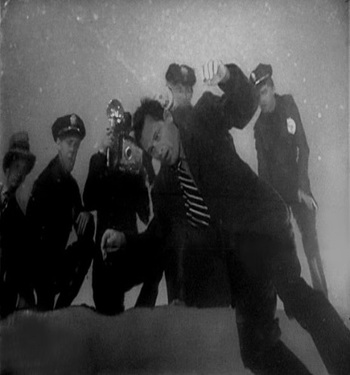 The poor dope. He always wanted a pool.
A.k.a The Law of Inevitable Immersion.

If there's a swimming pool, and the people around it are fully clothed (i.e., not in swimsuits), someone's going to end up in that pool—either by falling in or being pushed. Sometimes by jumping out of a building.

If the program is a Police Procedural, the immersion will have already occurred, and the police will be investigating its tragic results (or possibly its antecedent, as not all bodies found dead in the water necessarily died there). If it's an action genre, someone's going to fall into that pool and die in a diffusing cloud of pink.

A form of Chekhov's Gun. Frequently enforced (at least in live action material) by the aggravations and hazards of filming near a pool — protecting the equipment from moisture damage and electrical shorts, risk of someone falling in by accident and ruining makeup/wardrobe/props, etc. — that all add up to avoiding using a set with a pool unless the script demands a pool.

May overlap with Symbolic Serene Submersion, if the water represents something else.

Not at all related to the Rule of Cool, but pools are cool, figuratively and literally.