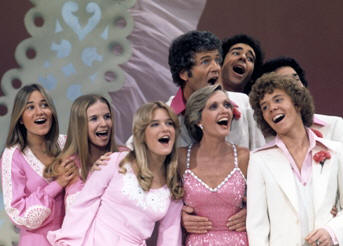 "And the family changed, as all American Families do...children grow up, get married, host variety shows and turn into cartoons."
— Narrator, Brady - An American Chronicle
Advertisement:

Next to fellow Paramount production Star Trek, The Brady Bunch most likely holds the title for Most Attempted Spinoffs. Here then is (as TV Land once put it) ... The Wonder of Brady.

Spinoffs with their own pages:

open/close all folders
The Brady Bunch Hour
The Brady Bunch Variety Hour (shortened to The Brady Bunch Hour after the pilot episode) was an ABC show from 1976-1977 that had the family move to New York and produce their own Variety Show. Yes, the cast hosted the show in-character as the Brady family. It might be the most infamous spin off, not just of The Brady Bunch but of any TV series. It lasted nine episodes.

The Brady Brides
The Sequel Series about what happened after Marcia and Jan became adults, which ran for 10 episodes. It began with a 1981 Made-for-TV Movie titled The Brady Girls Get Married. Jan falls in love with a college professor named Phillip Covington III, while Marcia falls for a toy salesman named Wally Logan. They decide to have a double wedding right in the Bradys' house. Hilarity Ensues since, among other issues, the two brides have extremely different ideas of what kind of wedding they want.

The Brady Girls Get Married contains examples of:

The sitcom The Brady Brides picked up where The Brady Girls Get Married left off. Marcia and Jan have married their respective boyfriends, and the four of them must now share a house. The husbands don't get along.

The Brady Brides contains examples of:

Advertisement:
A Very Brady Christmas
The 1988 Made-for-TV Movie A Very Brady Christmas saw the now-adult Brady Kids reunite with their parents, and stands out as one of the most somber Brady Bunch works. There is a great deal of tension between the various branches. Jan and Phillip are having marital problems; Marcia's husband Wally has lost his job and doesn't want anyone to know; Greg's adored wife decides to spend Christmas with her own family instead of the Bradys; Bobby secretly dropped out of business school to become a race car driver; Peter and his girlfriend are dancing around the possibility of engagement; and Cindy wanted to go on a skiing trip with her college roommate instead of coming home. Midway through the actual Christmas celebration, just as it seems like all the tension has finally been resolved, Mike gets a call to a building site, where the construction is threatening to collapse and kill another architect's workers. He gets trapped inside himself, leaving the family waiting for news.

The Bradys
Capitalizing on the success of A Very Brady Christmas, the characters received another Sequel Series, The Bradys, in 1990. It also stands out as one of their most somber works. It lasted six episodes, later compiled into three Compilation Movies.

The Bradys contains examples of:

Brady: An American Chronicle
To help promote the 1995 movie, cable channel TV Land created this special in the style of Ken Burns Baseball and Civil War documentaries, complete with grainy black and white photos, white letter on black background title cards, and experts in the social importance of all things Brady. Featured cameos of Davy Jones and Susan Olsen in character.

Growing Up Brady contains examples of:

Advertisement:
A Very Brady Renovation
In 2018, the San Fernando Valley house that was used for exterior shots in the original series went up for sale. Initially, the sellers accepted an offer by Lance Bass of *NSYNC, but at literally the last minute, HGTV stepped in and bought the house for nearly twice the listing price. The network's plans for the house? Make it as exact a replica as possible of the house in the series — exterior and interior. With the help of many HGTV personalities. And the actors who played the six Brady children. A Very Brady Renovation, premiering on September 9, 2019 to coincide with the 50th anniversary of the original series, chronicles this project.