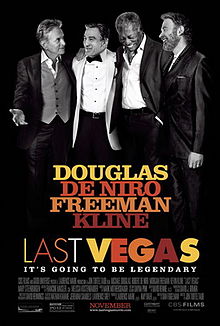 Billy, Paddy, Archie, and Sam are childhood friends from Flatbush, Brooklyn, who call themselves The Flatbush Four, and who are now approaching their senior years. Paddy (De Niro) is in mourning for his wife, Sophie, who died the year before. Archie (Freeman) is a happy grandfather who's recently had a stroke and whose son tries to prevent him from having a second stroke by keeping Archie "out of trouble". Sam (Kline) is happily married, but feeling detached in his everyday life. Finally, Billy (Douglas), at the age of 70, has decided to marry a 31-year-old and that the Flatbush Four need to reunite one last time for a bachelor party in Las Vegas. Along the way, they meet Diane (Mary Steenburgen), a former tax attorney turned lounge singer. Both Paddy and Billy fall in love with her, and an argument dating back to Sophie threatens to tear the group apart again.