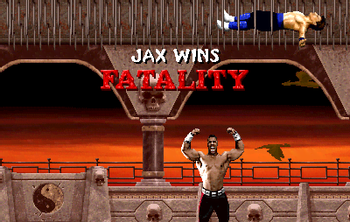 Sometimes, in a Fighting Game, a plain old Finishing Move just won't do when the game commands that you "Finish Him!!" Enter the Stage Fatality. These moves combine the usual lethality of a finishing move with Everything Trying to Kill You.
Advertisement:

Typically, not every stage will have a fatality to go with it, either because it wouldn't make sense or the developers just didn't think to make one. A lot of older fighting games, like Mortal Kombat II and Killer Instinct, will go with the Rule of Three for how many different stage fatalities there are.

Subtrope of Finishing Move and Everything Trying to Kill You.