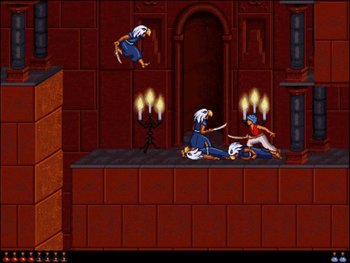 Prince of Persia 2: The Shadow and the Flame is the second installment in the Prince of Persia series. Originally released by Brøderbund Software in 1993 for the IBM Personal Computer, it was ported over the next few years to the Apple Macintosh and in Japan to the PC-98 and FM Towns. A Super Nintendo Entertainment System version was released by Titus Software in 1995; a Sega Genesis version never got past the prototype stage.

The story picks up from where Prince of Persia left off (actually, it clarified the first installment's story in its Opening Narration). The gameplay follows the format established by its 2D predecessor, with mostly new enemies, all new Booby Traps and greater variety in puzzles.

Not to be confused with Prince of Persia: Warrior Within, the unnumbered sequel to The Sands of Time.