Video Game / Way of the Warrior 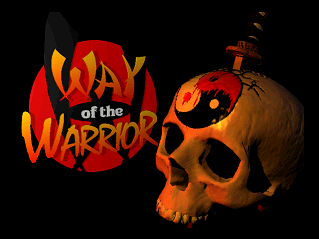 Harken me for I tell a tale known to precious few, and extend a challenge to compete with the greatest warriors the world has ever known. The victor will gain entrance in the Book of Warriors and his name will be law for centuries to come. Although nobody knows from whence the Book of Fighting came, it is known that it is the complete compilation of the world's greatest competitors, their methods, and their stories. Written by magic in the blood of champions the book has been kept since before history in a mountaintop citadel in the Himalayas. It is at this citadel that the world's greatest competitors fight for inscription of the Book. Good and evil, mortal and immortal convene once a century to compete under my watchful eye. As guardian of the book I am devoted to the three true forces of nature: Good, Evil, and the Pain caused by their eternal conflict. In an endless search for resolution to this struggle, I have yet again brought together the planet's greatest warriors, but for the last time. For the Book of Fighting has but one empty page, and it is written that the way of this tournament's winner will fill this page, finish the book, and tip the scales in favor of good or evil for eternity. The balance of the world will lay in the hands of only one. Find the way, noble challenger! Find The Way of The Warrior!''

One of the many fighting games that tried to copy Mortal Kombat.

Released by Universal in 1995 for the 3DO, Way of the Warrior was one of the first Naughty Dog creations. It was largely made in basements and houses of the developers, using their friends to represent the digitized, live-action fighters.

The plot revolves around a one-on-one fighting tournament in a mountaintop citadel in the Himalayas. The tournament is held once every century to determine the best fighter in the world. Said fighter is then given an entry in the "Book of Warriors," a compilation of the life stories and fighting techniques of the world's greatest fighters. The rest of the world either prospers or falls into despair in line with the good/evil alignment of the last winner. This now presents a problem as there is only one more blank page in the book, and the final winner will tip the scales towards good or evil forevermore.