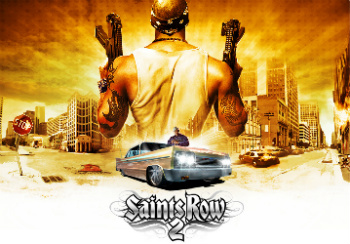 East side. West side. Your side.
I got gangstas in the crowd, bad bitches at my show
Yeah, it's parked outside, and it's sittin' on fo's
And I luv it, yeah, and I luv it.
— Young Jeezy, "I Luv It"

The second game in the Saints Row series.

It turns out that "Playa" survived the blast that ended the first game, but has spent five years in a coma — the game begins just as he (or she — you can now play as a female character) wakes up. Upon busting out of prison and rescuing homie Johnny Gat from the electric chair, they discover that four forces have risen to fill the void in power left by the Saints' disappearance:

Alive, pissed, a lot more talkative, and with a thirst for vengeance against those behind the explosive attempt on their life, "Playa" becomes "Boss" as they rebuild the Saints from the ground up and embarks on a mission to destroy the other gangs, and eventually become the kingpin of the city.