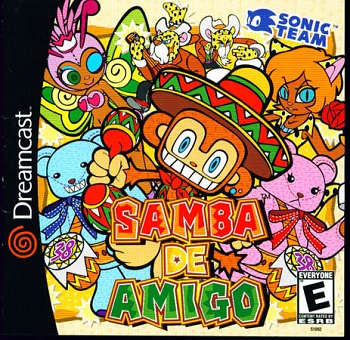 SAMBA!
Developed by Sonic Team, released in 1999 as an arcade game, and for the Dreamcast in 2000, Samba de Amigo was a Rhythm Game that had elements that were ahead of its time: such as motion controls, a diverse soundtrack of mostly pop music (primarily from Latin pop artists like Ricky Martin and Jennifer Lopez, along with many others ... like Reel Big Fish and Chumbawamba for some reason), an early form of console DLC (going online merely "unlocked" them, as they were apparently on-disc already. They were mainly remixes from other Sega franchises), and a vibrant cast of characters headed by a crazy looking monkey in a sombrero.
Advertisement:

The game is simple enough, as balls travel to the music into an array of rings representing various angles and heights (low, middle, high, and left and right), you shake a maraca (or two for more points) at that angle or location (the arcade version used magnetic sensors, the Dreamcast used infrared sensors, while the Wii uses the Wiimote, of course). There's also moments where you have to correctly strike a pose. As one performs well, the environment transformed into a wild party atmosphere. Doing poorly, on the other hand, does not.

And of course, the game was a hit grande in both America and Japan; scoring a 32/40 from foremost Japanese gaming authority Famitsu, a Best of 2000 award from GameSpot (where, as many music games of the time were, it was classified as a puzzle game. Yes, you heard us.) It even spawned a Mission-Pack Sequel, Samba de Amigo ver. 2000, which added more songs, new modes such as "Hustle" (which adds more posing to the mix) and "Survival" (multiple songs in a row), and more. It almost got released in the U.S. in 2001, except this came at around the same time the Dreamcast was being phased out, so it was left unreleased.

Gearbox (of Borderlands fame) ended up producing a remake for the Wii in 2008, which maintained many of the original songs, added more features (like a Career mode, some modes from the "Ver. 2000" that got cancelled for the U.S., and paid DLC — it was the first Wii game to support such content.), and uses the much more rigid motion tracking system already provided by the console (Maraca shells for Wiimotes not included. They do exist though). While it didn't get as much acclaim as the original, it's still quite good.