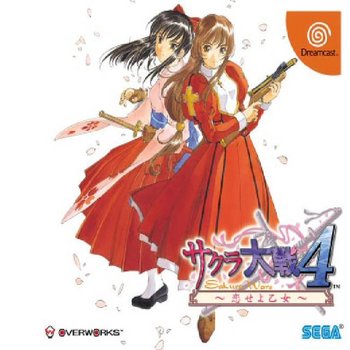 Sakura Wars 4: Fall in Love, Maidens is the fourth game in the Sakura Wars series and one of the Sega Dreamcast's final releases, developed by Sega and Red Entertainment. Initially released in 2002, it was ported to Microsoft Windows in 2005 and 2007. It was the final Sakura Wars game made before Sega became a third-party developer.

In 1927, two months after Ichiro Ogami returns to Tokyo in Sakura Wars: The Movie, the ghost of the daimyo Nagayasu Okubo escapes from imprisonment and seeks to exact revenge on the people who have vilified him. While producing a stage adaptation of Les Misérables at the same time, Ogami leads the Paris and Flower Divisions in an effort to stop Nagayasu and save Tokyo for the last time.

Fall in Love, Maidens was the last main entry to use the services of Noriyoshi Ohba as an executive producer, the last to be developed by Overworks before their reorganization, the last to feature Michie Tomizawa as Sumire Kanzaki until Sakura Wars (2019), and the final entry to feature Daisuke Gōri as Yokihiko Otanote outside of the "Shin Aoi Tori" and "Shin Ai Yueni" stage plays before his death in 2010.

While this is not intended to be the final Sakura Wars game ever, it serves as a culmination of everything that has happened in the series and the last mainline game with Ichiro Ogami and the original Imperial and Paris Combat Revues serving as the focus. The game is followed by Sakura Wars: So Long, My Love.