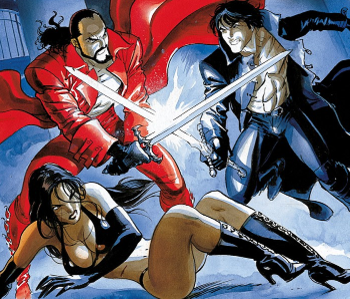 Crystal: Well, Haley, looks like this is it. I expected more screaming, but this'll do. Game over, you lose.
Belkar: [tackling Crystal] Last minute field goal!! We're headed to overtime!
Bozzok: Damn it! See, THIS is why you don't take your time killing the heroes!
— The Order of the Stick
Advertisement:

Oh, no! The villain has beaten the hero in a fight! Our hero is down on the ground, battered, bloodied and helpless. The villain triumphantly raises his weapon, delivers his gloating one-liner. This is it, our hero is done for! The Big Bad gleefully readies the Coup de Grâce...

There are three general ways that this happens. Either the hero pulls some last-minute trick out of his sleeve and delivers the killing blow to the villain, one of the other Big Damn Heroes leaps in from Behind the Black to finish off the baddie himself, or the villain was Already Dead.

If the good guy has the bad guy at his mercy, then a Sword over Head is the usual result. In that case, the hero will either stop himself or go through with it. The distinction between the two is that the good guy almost always gets to make the choice himself and live with the result. Occasionally, somebody else will kill the bad guy, either while the hero is thinking it over or just after the hero decided he couldn't do it. This will often happen eventually if the game makes use of a Coup de Grâce Cutscene. May be the result of a successful Diagonal Cut. Compare Ominous Adversarial Amusement.

No more reaping for you, Hel.

Example of:
The Death of Death

No more reaping for you, Hel.